We did three walks while we were away, none of them arduous. Two day walks, one with Pete just long enough to smell the scenery, and one that my photos tell me was long enough to be thoroughly memorable. Had lots in it. And then there was the chance to walk back from Kyoto to Tokyo, nearly 400 k.s — so no, not all the way. Some of it, and not the way anyone would drive these days, an old imperial trail through the mountains of central Honshu (believed to be remote, but yes and no) staying each night in a ryokan mostly in genuinely small villages. And on the last day walking 16 k.s over a pass, getting three trains and a bus and emerging at a hotel at Narita airport ready to come home.

Each was wonderful for the same and different reasons. The same reasons: the combination of physical exercise, very direct contact with the landscape and slow inhalation of what’s happening and where you are is hard to beat. The differing reasons are described below.

When we were in Nikko there was a free afternoon with an option to go walking in the Oku-Nikko area also known as the Lake Chuzenji-Yumoto Hot Springs area. As you expect in Japan, there are a score or so of very clearly defined routes you can choose from. The Senjo-ga-hara looked fine. It began at a bus terminus so no mistake possible and ended on a bus route which would definitely bring us back within a dropkick of the place we were staying. It was also about 6 k.s and in so far as there was any gradient, downhill. The sign at the beginning said four hours but, my goodness, you’d be doing a lot of sight seeing if it took you that long. It also began and ended at waterfalls and there was a cup of tea (and/or tempura prawns on a stick slash green tea ice cream slash all those other fast food options that make Japan the nation it is today) at either end. The middle is a national conservation area of marshland.

The first day of walking in another country is always a bit tentative. Is it going to be different? Can you find your way? Any cliffs to climb? Your imaginings have no real direction. But after 100 metres it’s usually the same.

After circumambulating a vaguely sulphurous lake, we found the first waterfall and the shop ok and encountered our first sign warning us of beers. Sorry, spelt that wrong: bears. 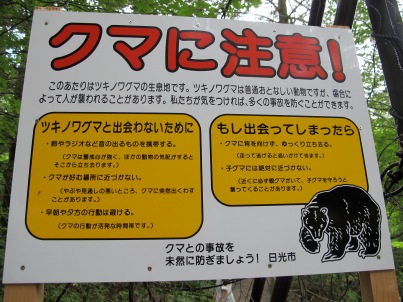 There were quite a few walkers out on the Senjo-ga-hara; it was a lovely day, up about 1500 metres and consequently cooler. Most of them had bear bells attached to their packs. Tinkle tinkle tinkle they go as they track along. We Googled the last bear attack in Japan and it appears to have happened quite recently, June 13 in fact.

‘Four people were injured in a series of attacks by at least two bears on Saturday and Sunday in Hanamaki, Iwate Prefecture. According to police, the first attack took place on Saturday evening in a garden, where an 81-year-old man was attacked from behind by two bears, NTV reported. Police believe the animals to have been a female bear and her cub. The man sustained serious injuries in the attack, following which members of a local hunting club shot the cub. There then occurred a series of bear attacks between 6:30 p.m. and 7:00 p.m. on Sunday, 1.5 kms from the site of the first attack, in which three people sustained injuries and were hospitalized. The head of the local hunting club told the press, “The bear is worked up, so there remains a strong possibility that she will attack again.” Police and members of the hunting club began a patrol Monday morning to search for the bear. Police are warning local residents to be on guard.’ So there you are. But we didn’t see any bears.

It was a lovely stroll through forest and wetlands with glimpses of certain ideas of landscape perfection. Like this.

And we got to the end without incident. Pete zoomed on further at the end, but we waited for our bus.

Local bus trips in Japan are paid for by taking a numbered ticket as you get on. You can watch your fare increasing on a screen above the driver as you motor along. You need the right money because there is limited option for change, so having a pocket full of 100 yen coins and a few 1000 yen notes is a requirement. In this case we got somewhere near where we wanted to go, a place to have a cup of tea etc, still up on the plateau 20 k.s from ‘home’ in Nikko, before running out of change. We found a very nice cafe, were given a free helping of shaved ice, had a yarn with some other customers about life in Australia, changed a 10,000 yen note and waited for our next bus. Fully organised. Got the bus and navigated the (famous) 30 hairpin bends (one way up one way down, there are more bends on the way up) to get us back to Nikko and went to get our fare to get off.

But not only didn’t we have the right change, we had no money at all. I’d left my wallet somewhere. Not passports and camera and all that (Keith), just all our money and credit cards. Oh that’s a white moment that is. Baaad. Our distress must have been evident to the driver because he let us off without paying, and as we stood on the side of the road in Nikko a taxi materialised out of nowhere (a side street in actuality) and we pointed back up the road.

It was a long and slightly terrifying trip back up the hill. I was beginning to hate those bends. I thought maybe I’d left the wallet at the cafe, in fact I became sure I had. But would it be open? And if not, what then? Ichi kilometre, I said as we closed in on Lake Chuzenji, and as we drew closer I saw the wallet on a log where I had been sitting waiting for the bus. Hah! Phew. Etc. When we got back to Nikko I paid him with a 10,000 yen note, not cheap, enough to be a lesson, and tried to impress on him the fact that we’d both been very lucky and that he should preserve this note for his children. Not sure if that worked, but the sun came through the clouds. 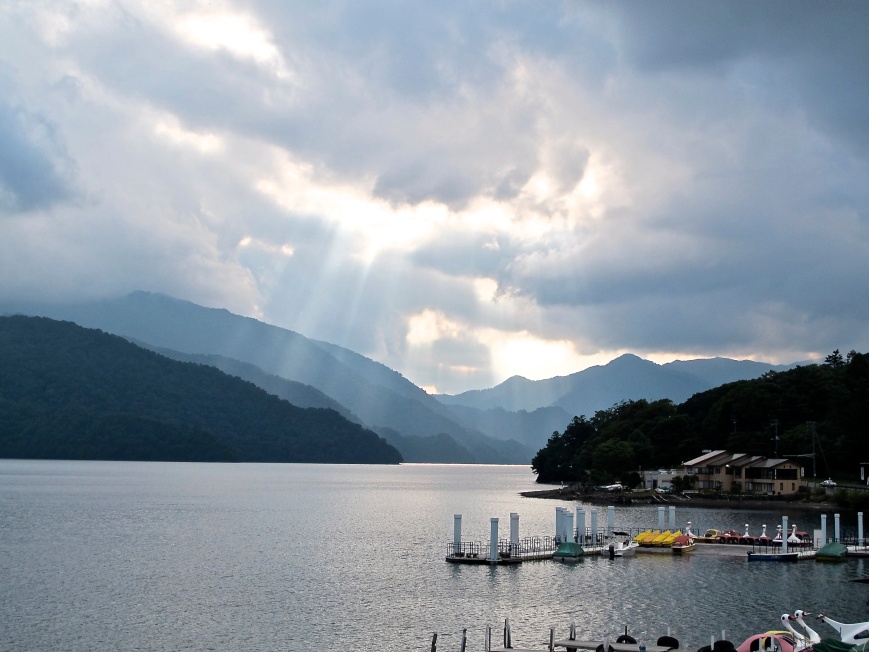 Yamanobe-no-michi (‘the road along the side of the mountain(s)’; Senjo-gahara incidentally, I think, means ‘Senjo battefield’) is a hiking trail which runs north to south on the eastern foot of mountains of the Nara basin. The path was originally part of the Shinkaido,  ‘new road or opening’, a 1,700 km long route originating in Edo, present day Tokyo, somewhat paradoxically Japan’s oldest road. The area Yamanobe-no-michi runs through has been/is believed to be a mountain residence of gods, and the trail courses through forest, villages, agricultural land (rice paddies, orchards, market gardens — the egg plants were ready for eating) past ancient (and destroyed) moated villages, half a dozen significant (Shinto) shrines, almost as many temples (Buddhist) and several kofun, Imperial burial mounds, dating from the 4th-7th century AD.

I’d had my eye on it since the last time we tried to go to Japan a few years ago. It sounded easily doable, an hour by train from Kyoto and potentially very interesting. (My eye: the Lonely Planet Guide to Walking in Japan, full of mouth-watering options.) Mr Sasatani, our friend in Kyoto, also recommended it. He had walked it several times himself and provided remarkably detailed maps and instructions for managing it. The first instruction was to avoid getting to Tenri, the start, by JR — no good, bad connections, take forever — but to go by rival line, Kintetsu.

For those of you who are put off going to Japan by the prospect of being manually pushed into an already packed train carriage, this is how the Kintetsu platform for the Tenri Express looked at 8.07am on a Sunday morning (for an 8.14 departure). 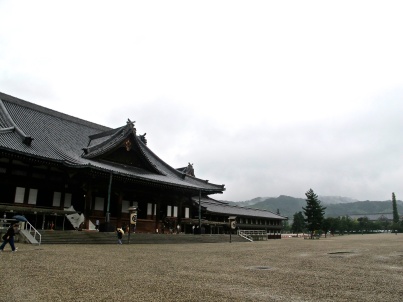 Tenri is the home to Tenri-kyo, a new (1838) Buddhist sect with millions of adherents. This is its rather forbidding home. [And I don’t think I can get this pic in the right place. Please just follow along.]

We met some of these adherents at the entrance to the station, singing and chanting. (And yes, Myrna is looking at the trail map provided. Walking the Yamanobe-no-michi is a well-rehearsed activity.)

In the next hour we met a lot of Tenri-kyo adherents doing the same thing but in motion. There were lots of noises on this walk besides the chanting: soccer games being refereed, what was possibly martial arts practice, social gatherings and, in spots, in the forests and near the kofuns, a deafening cacaphony of insect noise. The day began wet, but no more than an umbrella full, and became drier during the course of the day, ie the rain failed to descend instead remaining suspended in the air as a steam bath.

The track is not in the bush; it is, as advertised, along the side of a densely settled basin.

Half the battle with successful walking is starting in the right place. You might think that odd, but most of our walking disasters have been caused by beginning at the wrong spot or heading off in the wrong direction from the correct starting point. When you’re settled on the track, it’s harder to go wrong. Here, the way to the start at least is well telegraphed. 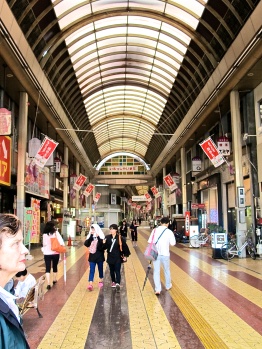 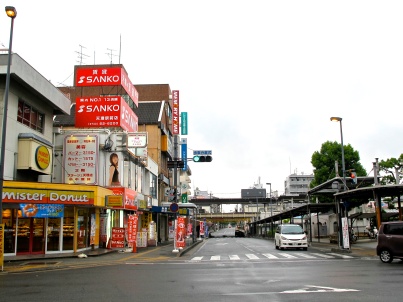 You walk down this arcade (and just for the sake of interest the reverse angle), and turn right at a Family Mart convenience store. There’s a nervous moment when you go left off the main road up a hill. There’s lots of signage but none to be read by us. Then, incontrovertibly, the start — at Isonokami-jinja (jinja = shrine). 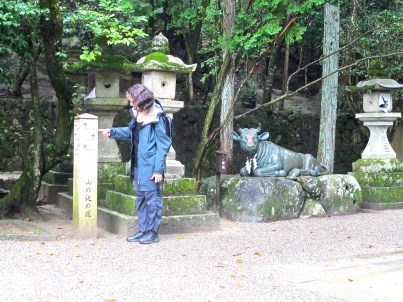 All you have to do then is go south rather than north where the trail continues. Is this an inviting prospect or not? 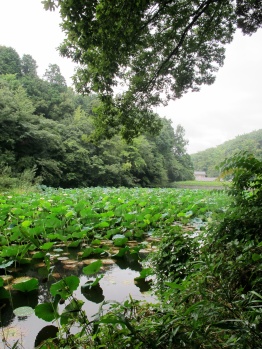 We turned the corner and this is what it looked like, and I thought, picked a good one here. It was just so varied and interesting. I’ll let the pictures tell the story for a while. 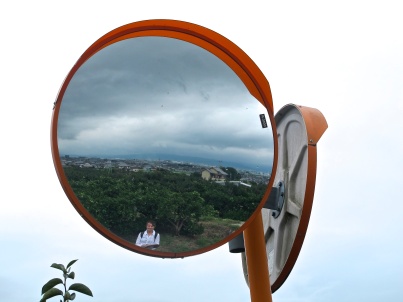 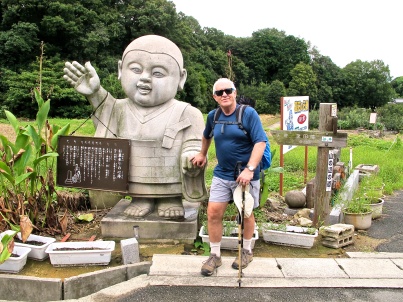 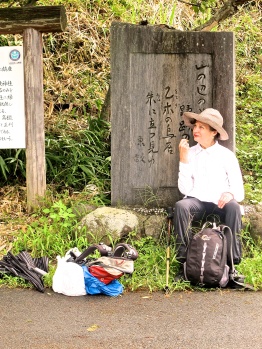 We arrived at the first kofun a bit flummoxed. Where was the torii? Where were the structures? This was where we were, at the smallest of them. The larger ones you walk around and only at the end think, ah kofun, usually because, as here, there was some water feature emphasising the keyhole shape. They were mainly distinguished by the incredible density of vegetation covering them, perhaps obviously, let run, unfettered. The insects on the largest of them (Suijin’s tomb) were so loud I shot some video of the wall of green just to record their noise. 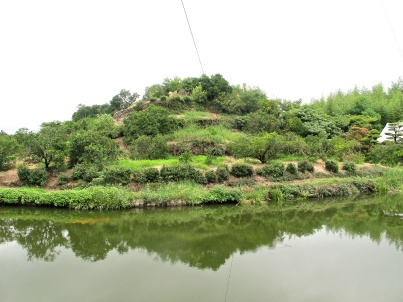 We deviated into the grounds of Chigaku-ji and climbed through sticky forest past endless temple-ettes to the top of the range as it was there and came back to a very fine garden and pond.

The golden fish just missed out on being included in ’13 Beautiful things’. I think we could qualify this as Japanese.

One of the features of the track was the persimmon orchards, just off harvest I would say. And — for Keith Gill, please direct his attention to this — a most unusual form of coppicing. 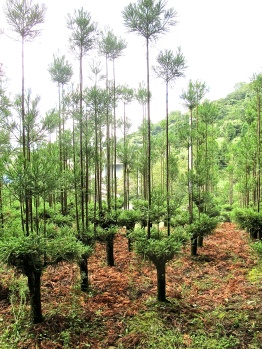 And we came off the trail at the avenue leading up to Omiwa-jinja, had a green tea ice cream and waited 90 minutes for the JR train to Nara ( the ancient capital, not Narai which features in several other blogs), from which we took a local back to Kyoto and which indeed did make 21 stops. But who cared? It had been a completely splendid day.

Now this blog is getting too long. The third walk,  Nakasendo Trail will be dealt with separately.