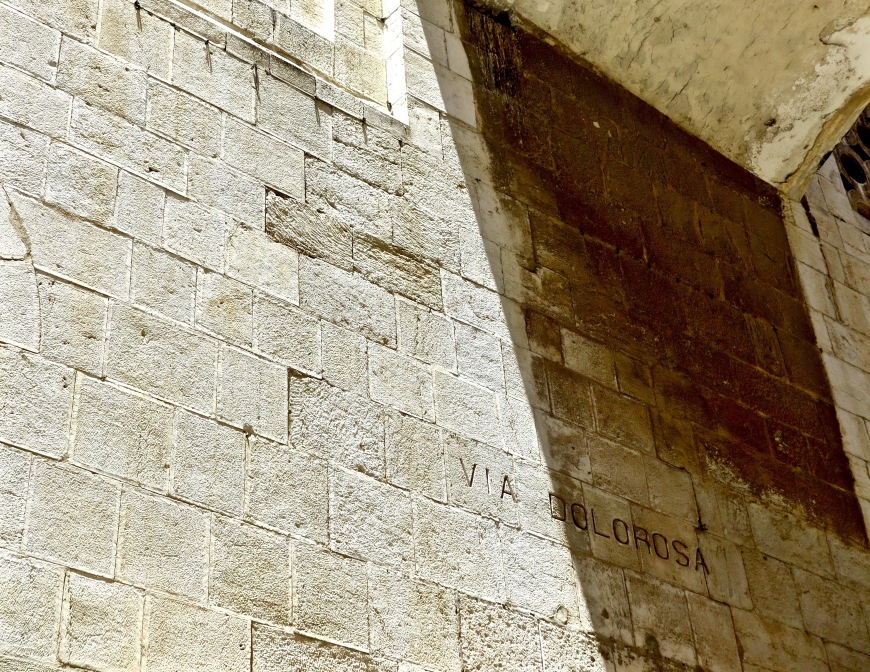 ‘Via Dolorosa‘ means the Way of Sorrow or Grief.

In Jerusalem’s Old City, the Holy City, it runs about 600 metres from the Lion Gate in the Muslim Quarter to the Church of the Holy Sepulchre. Along its path are nine stations representing the path from Pilate’s judgment and Christ’s subsequent flagellation to the site of the crucifixion. The other five which make up the structure of a spiritual pilgrimage which informs some Christian practice are located in Holy Sepulchre. 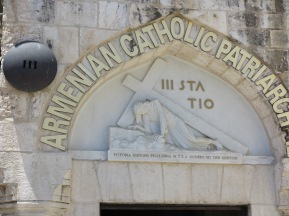 You identify the stations by metal markings like this one, Station III at the Armenian Church.

Although this was not the case when we were there, the Via Dolorosa can be furiously busy with pilgrims. On the 30th June this year (2018) I took photos at each of the Stations thinking that they might have something to say, among other things, about contemporary Jerusalem. Some explanatory notes follow, but start with the pictures.

I. Jesus is condemned to death by crucifixion by Pontius Pilate and is scourged. 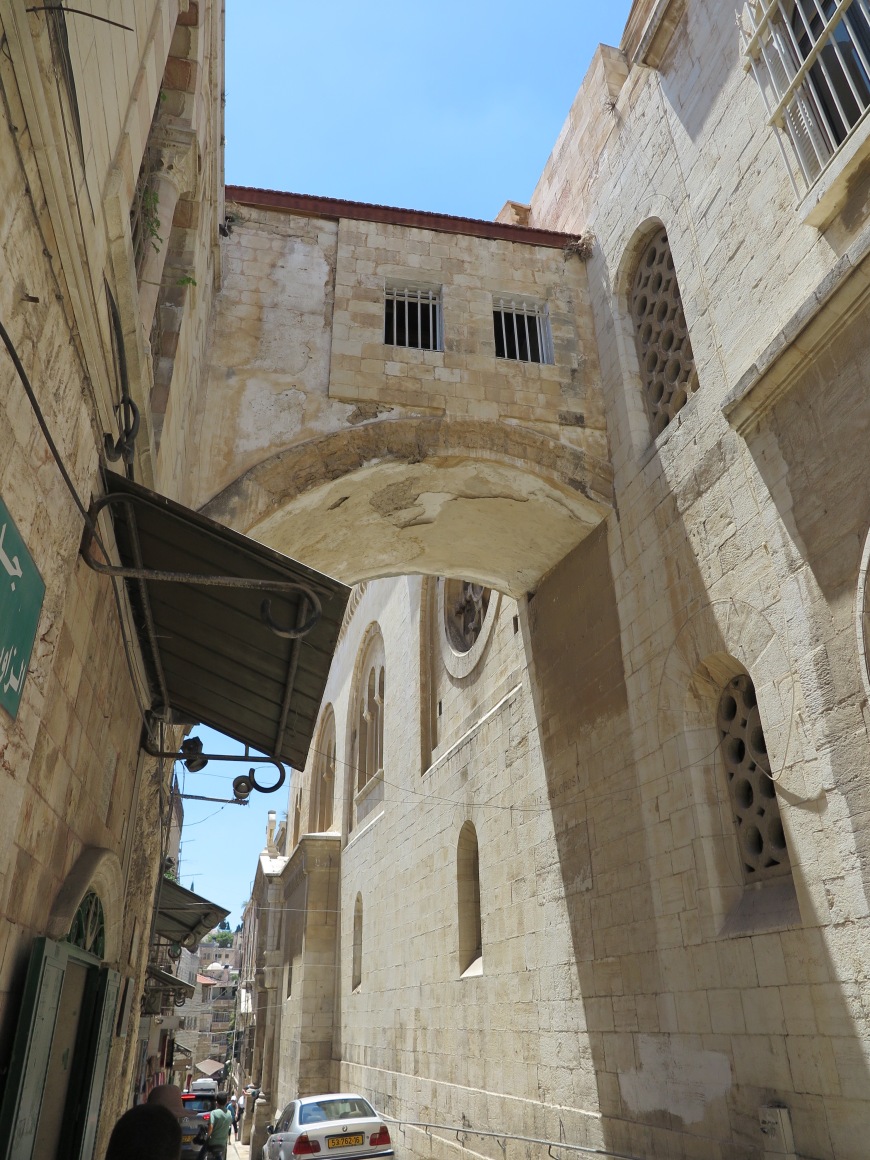 II. Jesus takes up the Cross. 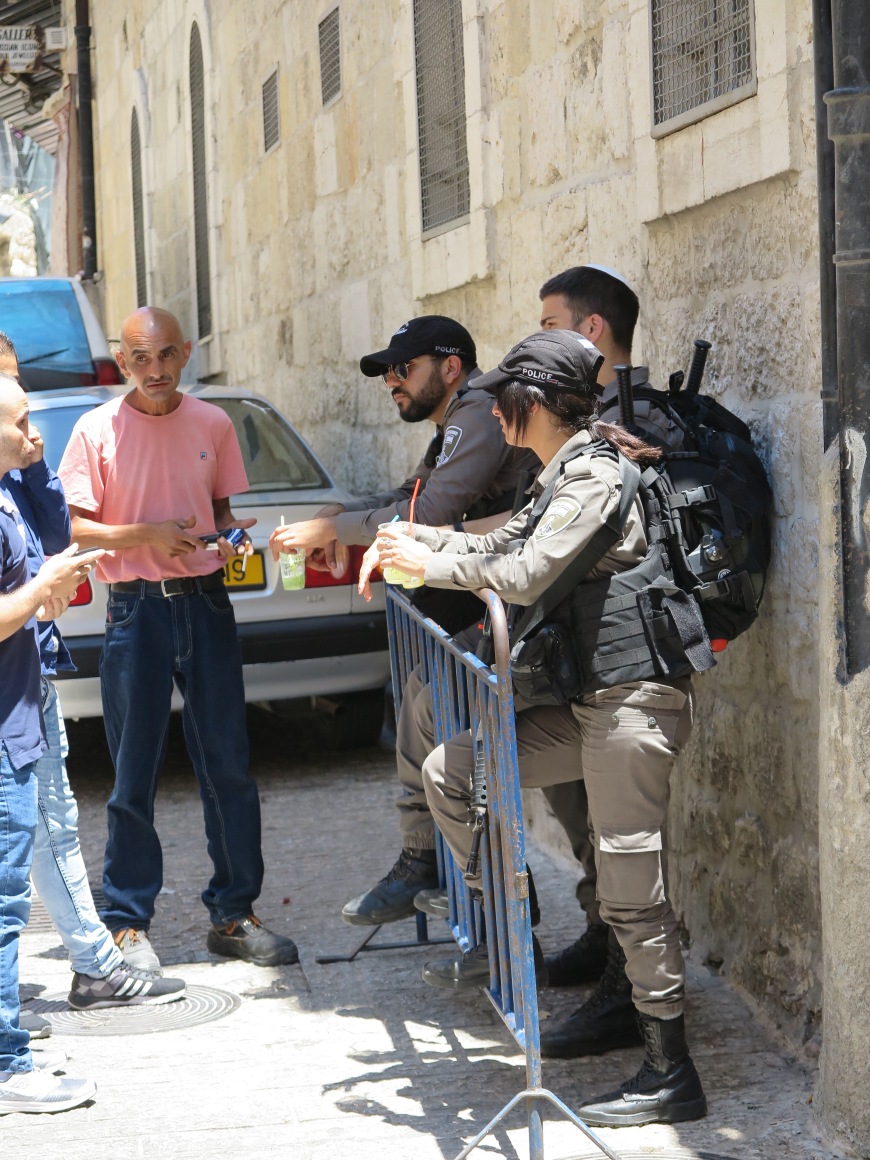 V. Simon of Cyrene helps Jesus to carry the Cross 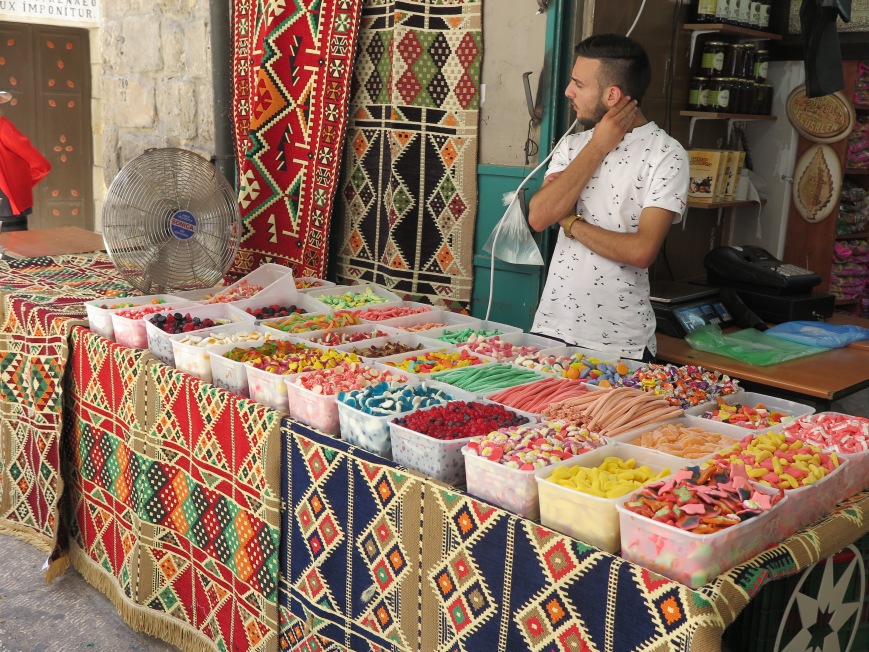 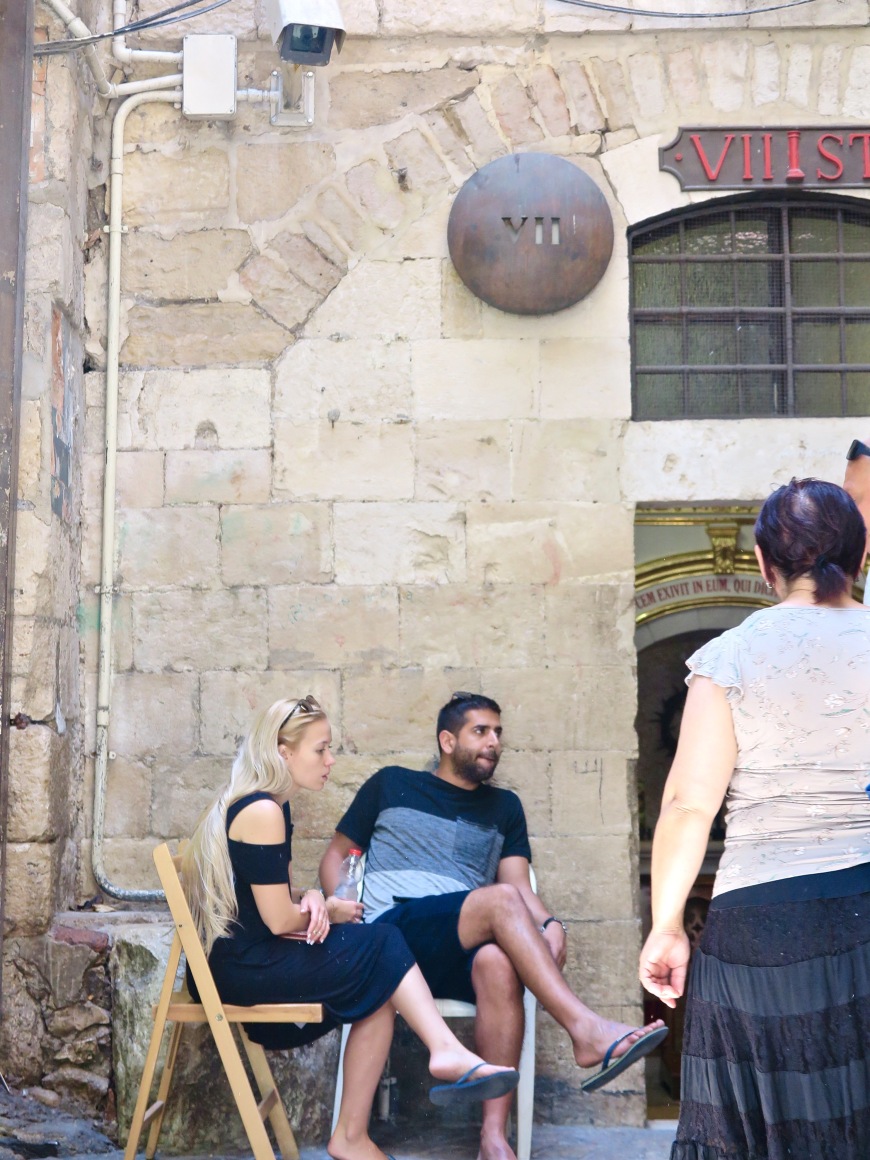 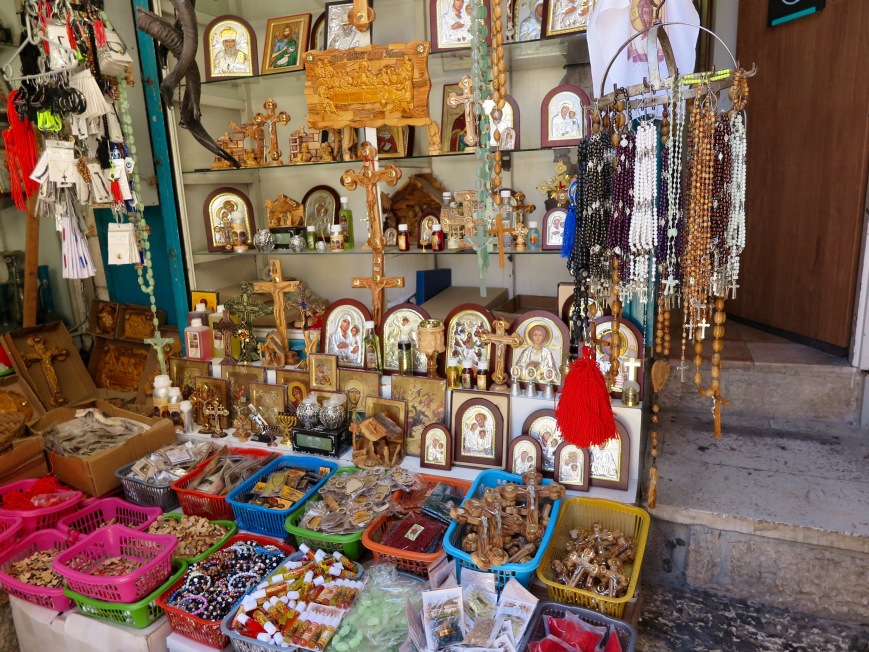 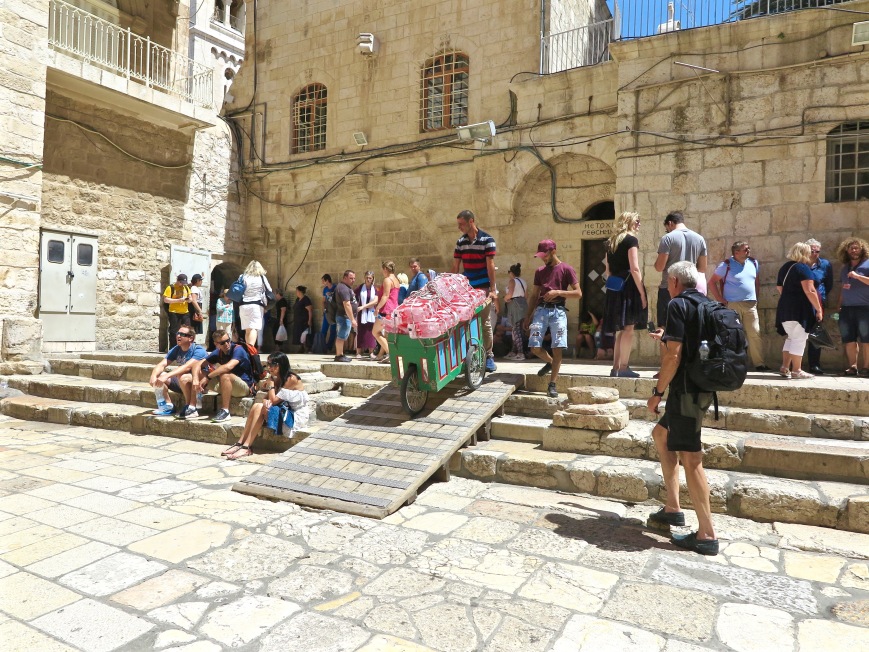 XII. Jesus dies on the Cross.

XIII. Jesus’ body is taken down from the Cross.

XIV. Jesus’ body is laid in the tomb.

I.   The Old City has four Quarters — Armenian, Christian, Muslim and Jewish. (It once had five, including the Moroccan ‘Quarter’ (?). As noted the Via Dolorosa is firmly embedded in the Muslim Quarter and begins at what is now El Omariye School, a Muslim institution not over-endowed with equipment but not on its uppers either. We were taken there by a student and the first photo is the view out the window — immediately next door is the second most sacred site in Islam, not a church nor a mosque, but Jerusalem’s most familiar landmark, The Dome of the Rock.

It is an exquisite and, to us, inaccessible building.

The site’s great significance for Muslims derives from traditions connecting it to the creation of the world and to the belief that the Prophet Muhammad’s Night Journey to heaven started from the rock at the center of the structure. It may also be where Muhammad convened a discussion with Abraham, Moses and Jesus.

However, in Jewish tradition the rock also bears great significance as the ‘Foundation Stone’, the place from which the world expanded into its present form and where God gathered the dust used to create the first human, Adam, and also as the place where God’s divine presence is manifested more than in any other place. So … no real pressure.

Since its completion in 691 under the Ummayad Caliphate, the first Muslim Dynasty, it has also been a Christian church, St Augustine’s, following the First Crusade (1099AD).

The second photo is the ‘Ecce homo’ arch immediately adjacent, near where Pilate produced Jesus after his scourging with the words intended to be ironic if not sarcastic: ‘Behold the man’.

The plaque embedded into the Church of the Sisters of Zion here. Tunc ergo tradidit eis illum ut crucifigeretur. ‘Then therefore he delivered him unto them to be crucified.’

II.   The police presence in Jerusalem is constant and quite formidable. That is the barrel of a semi-automatic assault rifle, standard police weaponry, peeping through the metal grid.

III.   Outside one of the Armenian Churches. Although it might be anticipated that carrying a cross or part thereof might occasion a fall (or three as the Stations suggest) there is no biblical reference to this occurring. It is one example of the embroidery of the story which has taken place over 2000 years. Pope John Paul II made an effort to encourage the use of another more biblical version of the Stations beginning in the Garden of Gethsemane and including Peter’s denial and the crucified thief’s conversion. This was to little apparent avail.

IV.    A decoration on the external wall of the Armenian Church. ‘Me. Stma. De La Esperanza Malaga — Espana.’ Probably referencing the Virgin of Hope of Macarena of Seville’, the weeping Madonna, a free standing icon. Why a hopeful Madonna should weep is unclear. Unlike most such images, the Seville icon has never been dressed in black, except once — for the funeral of the bullfighter El Gallo (‘The Rooster’).

V.   Just to confirm this was Station V., this is the rest of the plaque you can see in the top left corner.

VI.  Another importation. ‘A medieval Roman Catholic legend viewed a specific piece of cloth, known as the Veil of Veronica as having been supernaturally imprinted with Jesus’ image, by physical contact with Jesus’ face. Ecclesiastical wordplay [not an unknown entity] can convert the Latin words vera icon (‘true image’) into Veronica. It came to be said that the Veil of Veronica had gained its image when a Saint Veronica encountered Jesus, and wiped the sweat from his face with the cloth.’ No element of this legend is present in the Bible.

VII.    A minute separates these photos. Something happened.

VIII.   The first deviation from the straight and very narrow, a there-and-back up a flight of stairs. At that point also set into into the rock wall is this.

Much kissed, this symbol reads ‘IC XC NIKA’, shortened Greek, meaning ‘Jesus Christ conquers’. ‘IC XC’ is how the symbol of a fish, ‘ichthus’, became used to identify fellow Christians in the early years of the church.

IX.   Another imagined fall at the entry to the Church of the Holy Sepulchre. We are now in the Christian Quarter. A thousand large trucks would not be enough to remove all the material of this sort from the Holy City.

X.    The forecourt of the Church. He used his foot very skillfully as a brake.

XI.  There is some uncertainty about the location of Calvary/ Golgotha, the skull-shaped hill where Jesus was crucified. When visiting Jerusalem, (Major-General) Gordon of Khartoum (who also fought in the Crimea, China, India and the Sudan — what a taste for war he must have had) believed he saw the shape of a skull in rocks just outside the city walls, commanded an excavation and warmly congratulated himself on having found the site of Jesus’ death. Today that is a small quarry with a large bus station almost on top of it.

Our story has the crucifixion inside the walls, and certainly we have been climbing upwards towards the top of a fairly undefined hill. Jerusalem is a very hilly city and this includes the Old City. Some of the east-west ‘streets’ are called ‘Ascents’ and so they are.

The guide (in the red top) in this photo is telling her clients that the crucifixion occurred at or near the black-screened area with the dome on top. She’s paid to know these things. So, Station 11.

XII.   One of the many chapels in the Church, but the decisive one as far as the Stations go.

XIII.   The Stone of Unction where Christ’s body was laid after being removed from the Cross, site of the most fervent expressions of devotion we observed. Unction? Unguents, salves, ointment.

XIV.   The entrance to the Holy Sepulchre. The smokey atmosphere comes from an abundance of incense. The huge queue to enter the Sepulchre is out of sight on the left. The actual rock is not visible via this means. For this you need to go to the Coptic Chapel at the rear which is generally inaccessible. Far from reverent and calm the atmosphere is like that of a football crowd. Once a year when the  Pentecostal Fire descends from the Dome it can be dangerous to be in the unruly throng that gathers to view this ‘miracle’. You will not have noticed that there are 43 lamps over the entrance, 13 each belonging to the Greek, Latin and Armenian churches and four to the Copts. In the past there have been regular fist fights and worse here between priests and devotees of the various Christian sects.

Last note. The best evidence, historical and archeological, we have places Herod’s Palace where Jesus was sentenced by Pilate not far from the Jaffa Gate near the Tower of David, about a kilometre from the nominal starting point described above and making it most unlikely that Christ followed the path described on the way to his crucifixion. But then the Tower of David is not the Tower of David but a fortification built under the Mamluk Slave Empire — Muslims, and a long and fascinating story in itself — in the late 13th century AD.

Jerusalem, a city of endless paradox and dissimulation.