A knock at the door of one of the ‘scattering’ of cottages in Coburg, Victoria, just before Christmas 1852. Christina McAskill answered. A ragged young man stood there. ‘Your cousin Helen, Malcolm McRae’s wife, came on the ship Ticonderoga. I am Christopher [aged 17], her son. We were landed at Point Nepean and I have walked from that place with another young man [probably Finlay his younger brother]. We followed the beach till we came to Melbourne.’

Their epic 100 km walk through this most foreign of lands had taken them eight weeks. They had survived on shellfish and water offered by local Boon Wurrung Aboriginals. But Helen (aged 41), her daughter Janet (11), and her sons John (15), Farquhar (6) and Malcolm (2) were dead.

They had been among the 795 passengers (and 48 crew) on the Ticonderoga, a double-decker clipper, just 52m long, chartered by the Highland and Island Emigration Society to bring ‘cleared’ Scots to Australia. Campbells, McDonalds, McKays, and McWilliams as well as McRaes were on board.

There is some evidence that people who were already sick embarked from Liverpool. There is also evidence that conditions on the boat were appalling. ‘The ship, especially the lower part was in a most filthy state, and did not appear to have been cleaned for weeks, the stench was overpowering, the lockers so thoughtlessly provided for the Immigrants use were full of dirt, mouldy bread, and suet full of maggots…’ Of the 795 passengers 199 had been under seven.

At least 100 died on the way. (19 were born during the 90 days in transit.) Another 380 had ‘the fever’ (probably typhus) or dysentery when they disembarked at Point Nepean just inside the Heads of Port Phillip Bay. ‘The Argus’ reported that all told more than 180 died. Generated by this incident, what became known as Ticonderoga Bay became the site of Victoria’s first quarantine station.

Christopher and his father served out their indentured positions and went on to become farm workers and eventually owners. I’m one of around 800 of their descendants.

I was offered 500 words to tell a story for the Australian McRae newsletter, and that’s it.

It’s a story all right. My father thinks Christopher’s walk might be apocryphal. It would be too grand, too heroic, too unimaginable for his taste. However it is true that Christopher did arrive out of the blue at his mother’s cousin’s house in Coburg and that he was not transported with the main group who over time were ferried by boat to Melbourne. There is plenty of evidence for everything else.

This is one remnant of the experience at Point Nepean. 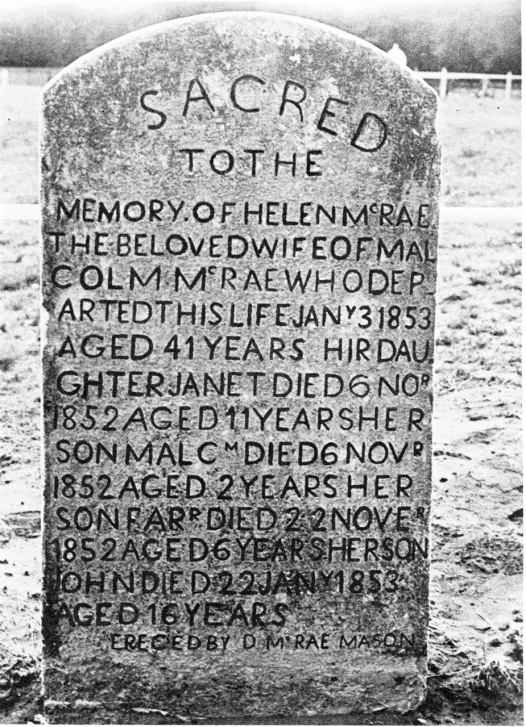 Christopher himself made a rough memorial at Pt Nepean out of wood with this inscription. Later proving himself to be a very capable newspaper correspondent, he probably didn’t include the spelling mistakes. His memorial degraded with time but was seen by a mason who also happened to be a McRae and who decided to construct his own facsimile out of stone. And it’s still there.

‘Clearing’? ‘The enforced simultaneous eviction of all families living in a given area.’ It was a process that took place over 150 or more years in Scotland: a transformation from subsistence to commercial farming, from common ownership and operation to the establishment of sharply-defined individual/ family property. In Das Kapital Marx described the clearances as ‘the robbery of the common lands, the usurpation of feudal and clan property, and its transformation into modern private property under circumstances of reckless terrorism.’

In the Highlands those evicted were often moved to coastal regions where kelp-gathering and -processing was one way of making a living. But in the first half of the 19th century the bottom fell out of kelp prices, landlord debt reached record levels and the same famine that began in Ireland in 1845 due to failures in the potato crop gripped Scotland. It was this famine that gave rise to the Highland and Island Emigration Society which sponsored around 5,000 emigrants to Australia from the affected areas of Scotland.

These are likely to be the remnants of a McRae croft on the Isle of Skye which we went looking for and found on a walk. The story was that one of the methods of eviction the (Scottish) landlords employed was to burn the roof timbers of these buildings. There was nothing available to replace them with.

There were 27 McRaes on board the Ticonderoga initially (the dead were thrown overboard, sometimes in groups of ten) and lots of other Highlanders but they had also collected about one-third of the company from south-west England — Cornwall, Somerset, Devon — where presumably the same sorts of things were happening.

The arrival of the Ticonderoga attracted attention. We know that because it was covered by ‘The Argus’, a newspaper of the time.

Terrible state of Affairs on board an Emigrant Ship at the Port Phillip Heads – Intelligence was brought to Williamstown, on Wednesday evening last, by Capt Wylie, on the brig Champion, from Adelaide, that a large ship, named the Ticonderago [sic] ninety days out from Liverpool, with upwards of 900 Government emigrants on board, had anchored at the Heads. A great amount of sickness had occurred among the passengers, more than a hundred deaths having taken place, and almost a similar number of cases being still on board. Nor was this all. The doctor’s health was so precarious that he was not expected to survive, and the whole of the medicines, medical comforts etc, had been consumed. (Just as it happens the doctor referred to survived and had a family here. He was comedian and writer Michael Veitch’s great-grand father.)

These things occur to me.

The first gesture at European settlement of Melbourne occurred in August 1835, that is people stepping off a boat intending to stay, find and build a way of life in that place. These events are occurring only 17 years later when ‘Melbourne’s’ population was 23,000. ( A year later in 1853 after the discovery of gold, it was over 100,000.) That tiny settlement has a newspaper, and quite a sophisticated one.

There is a public scandal. You can understand that issues of shipping and disease, especially when combined, might excite people living 25,000 km away from ‘home’ in very fragile circumstances. But the situation is such that there is a capacity to be scandalised. It’s possible. There is no cover up. The newspaper leads with the story. The journalist appears to have had very good access to any information he seeks.

Loud voices are raised. The commentator ‘Observer’ writes (‘The Argus’, 31/12/1852): ‘Being a sea-faring man and curious to know the state of the vessel which had been the scene of such unparalleled disease I went on board, and very soon ceased to be surprised at anything which had taken place on board this ill-fated vessel. The miserable squalid appearance of the passengers at once attracted my attention, and on looking down the hatchway, the smell and appearance of the between decks was so disgusting, that though accustomed to see and be on board of slave vessels, I instinctively shrank from it.’

‘I have no hesitation in expressing it as my decided opinion that the disease in this ship was mainly caused by the carelessness and inattention to cleanliness on the part of the master and his officers, and the want of ventilation. … Why is this ship allowed to come and vomit her diseased and dying freight in the midst of an over-crowded city? Men despair of the Government ever doing anything effective in these matters, unless it is forced upon them by the voice of the people through our independent press.’

From a report issued by the Land and Emigration Commissioners (11/2/1853): ‘Mr. Latrobe says of the ship itself, that “looking to its structure and capacity, no vessel could have been better suited to the purpose, and there can be no doubt but that under circumstances securing the unbroken maintenance of order, cleanliness, and general discipline, a yet larger number of persons might have been conveyed in safety to the colony.” But he adds, that “with an unorganised body of emigrants of the classes selected for the “Ticonderoga,” little surprise can be felt that no ordinary exertion of abilities could suffice to introduce at once system and order, and overcome that repugnance to cleanliness and fresh air which distinguished certain classes of the labouring population of Europe.”’

So it was the victims’ fault! Not keen on cleanliness and fresh air!

This is a refugee story. It could have been in today’s paper.