In 1167 King Geza II of Hungary recruited several thousand western Europeans, some Franks, some Rhinelanders, but forever after known as Saxons, to migrate to Transylvania and establish villages there. Their task was to create a barrier, initially to the Tatars (from Mongolia but later making a home in the Crimea) whose marauding bands were creating mayhem as far west as Vienna, later to the Ottoman armies. In return they didn’t have to pay taxes, were allowed to establish their own laws and to retain their language and religion (what largely in time became Lutheran Christianity).

These Saxon towns became known for their order and their obduracy, calm, productive places which produced far more than their share of food and crafts.

After the Second World War, nearly 900 years after the original settlement, the ‘Saxons’ were given the right of return to their ‘home’. No one knows how many left, but in 1930 there were 745, 421 citizens of Romania who claimed German as their first language. In 2011 there were less than 30,000. They hadn’t all gone back to ‘Saxony’; it was scarcely there. But after 900 years what on earth was ‘home’? This question has intrigued me for years.

Brasov (Kronstadt, ‘Crown city’) was one of these.  And so was Viscri (or Deutsch Weisskirch, ‘German white church’). 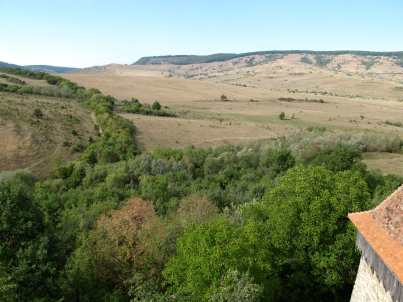 It was a blessedly short minibus trip from Sighisoara to Viscri through dry rolling hills. As Walter later explained, it was ‘oak’ country, not barren, not especially fertile, somewhere in between where oaks might grow well. Shepherds (and goatherds and cowherds) watched their flocks by day as we passed. The streets of Viscri were wide and silent as we pulled up more or less opposite one of the two houses owned by Prince Charles. (Why? You’d have to ask him, but also see below.) 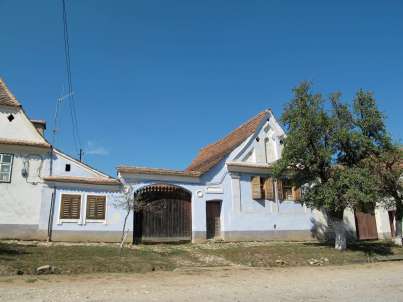 Our homestay was closing in a little on homestayliness. When we came in the ‘drive’, the lane down its side, a local woman was busy peeling a large mound of boiled peppers. The grapes on the vines overhead were past their best, but there were enough chooks and cats and kittens and goats and later a cow, along with a very healthy vegetable garden, to call it rural.

We were taken in hand by Walter who, with his wife Carolina and their families, made up half or more of the 15 Saxons in this community of about 420.

We sauntered up the main street and through an orchard which appeared to be village property laden with pears and apples; and there it was, so familiar but still a shock — the fortified, and white, church I had seen so many times on my computer screen. 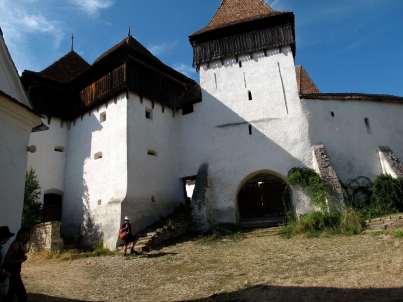 I climbed the tower. This would have been closed by any self-respecting OH&S officer, but it had been tested rigorously, I was assured, by Prince Charles’ bodyguards. (Imagine: ‘Charles fatally injured in Transylvanian catastrophe’.) From the top there was an excellent view of the ‘oaklands’ with some gypsies meandering home across the fields. 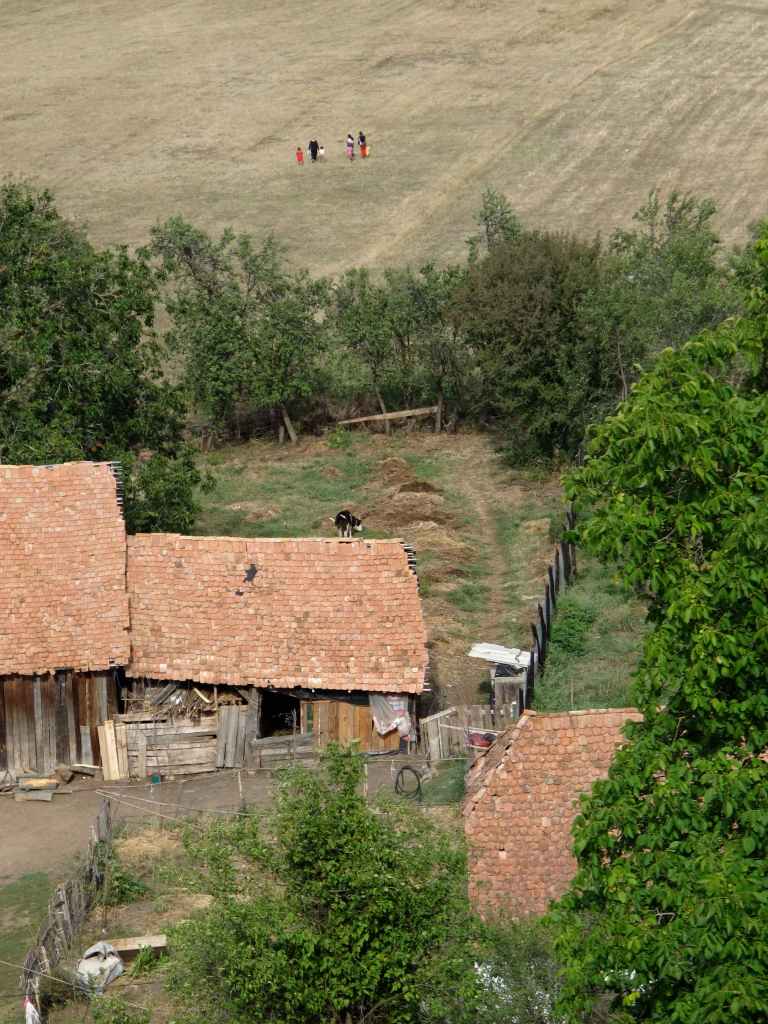 The church is used only three or four times a year for its defined purpose, but I prevailed on Carolina’s sister, its organist, to play us some hymns including some we could sing (albeit as best we could in German). I found a contribution from Charles Wesley in the hymnal but didn’t know it. However we sang, earnestly. 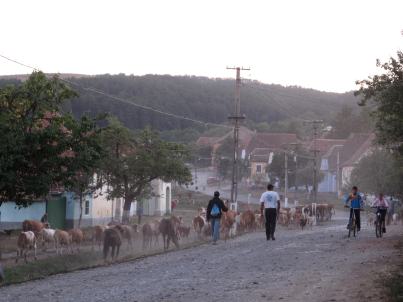 Dinner was excellent, fresh produce, cheeses, cake and some of Walter’s palinka which had some of the sharper edges knocked off it. We watched the cows come home, peeling off unbidden into their home laneways. A gentle sort of euphoria seemed to have fallen on the group. Perhaps it was the lovely weather, the very relaxing impact of being in the country, or perhaps the unusual amalgam of food for the senses and the mind.

Viscri is a UNESCO World Heritage site. Carolina, a woman of great energy and thrust, appeared to be the driving force behind this achievement. (She had 24 other Saxon villages within her purview.) She talked a good game, twice in fact, once in the church and once at dinner, about the importance of this work. 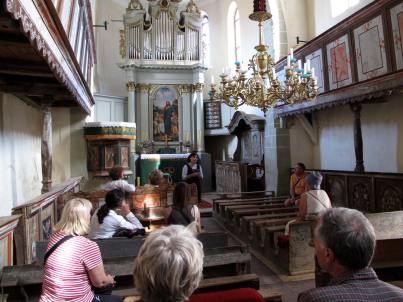 Her life included quite some time spent in Paris and Brussels making this happen and seeking interest, support and funding. Walter’s primary task seemed to be looking after the 2000 or so tourists who visit Viscri annually. These visitors include western journalists drawn, inter alia but especially, because of the connection with PC. (Camilla has never been.)

As I write this I am sitting in a resort on the east coast of Bali being driven quietly mad by the insistence of Balinese music piped from a restaurant which endlessly rolls around the same tonal figure, a digital version of a tape loop. Not all Balinese music is like this. The customers in this closed-ish compound where everything we want is on tap are being reminded that they are in Bali. The average weight of my companions on the sunchairs is twice, three times that of the Balinese swarming around them offering massage, fruit, hairdos, Bintang (local beer), sweets. 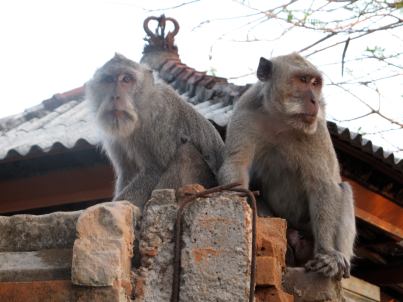 Last night I watched tourists feeding the monkeys at Uluwatu temple. These monkeys have been fed so often that their digestive systems have changed and so have their social habits and their capacity to survive in the wild. They are certainly not the monkeys they once were; but are they monkeys at all? As I listened at breakfast to the Balinese staff swearing eternal friendship to the Germans and Americans and French and Australians on departure I couldn’t help but wonder if something the same hadn’t happened to them. That’s what tourism does; we can all agree. But is it simply an inevitable, even necessary, part of evolution?

What is Viscri? A museum piece with its nature distorted by the wishes and interests of three percent of its population, the capable, charming and well connected three percent? When Carolina was making her case so emphatically for the maintenance of those 25 villages and their residual populations she talked about the gypsies with little warmth or empathy, in fact my notes say ‘contempt’. If so, she was not alone among the people we spoke to on this topic.

There are programs for the women. They knit socks and make felted slippers and hats to sell.

(Myrna bought one and wore it. The girls in the village giggled quite openly about this spectacle.) Old trades are being encouraged, sometimes by people who have no connection with the village. However skill and experience ran in the blacksmith’s family. I really didn’t want to go to see him. It was late in a golden afternoon, we’d done a lot, seen a lot, and I just wanted to sit down, do nothing and digest it all. And we knocked him up. He may have been in the middle of his dinner. The fire was barely there, but he got his hammer out and made a few nothings. I gave him 20 lei for a horseshoe nail; next to nothing, but far far too much. I didn’t want him living with his hand out to people like me.

‘There is a rare equanimity and balance between settlement, cultivation and nature in this medieval landscape,’ exclaims a western visitor in print. Simon Jenkins in ‘The Guardian’ writes of ‘the race to save the most endangered pre-industrial landscape in Europe from poverty-stricken newcomers [that’s those gypsies again] understandably eager for modernity’. In a very thoughtful article he has a bob each way but finishes, ‘If modern European union cannot guard such relics of its diversity it is not worthy of the name.’

But Viscri is not as it was in the C14th or the 17th or even the early 20th. It has been subject to constant and considerable revision. Historical evidence suggests that very little of the medieval settlements remain. Building methods were not consistent but changed, of course, according to the habits of the times. The buildings’ facades, the dominant feature of the present architecture, probably date from the late 19th/early 20th century.

The Saxons have not been ‘a dislocated tribe’, but have maintained trade, business and family connections over time with the areas they left. Ten of thousands of the departed Romanian German-speakers probably disappeared into gulags in the Ukraine and Siberia. Others left before the impact of Ceausescu’s communism became obvious. The houses, the cows, the simplicities of rural life and the oaks of the rolling dry hills were just not enough to hold them.

And so gypsies live in Viscri; but it is run by Saxons. A film crew with two studio quality video cameras pulled up as we waited for the bus to go to Brasov.

Did I say how much I enjoyed our time there? Very much indeed. I loved the church and I loved singing hymns and was most impressed by Walter’s and Carolina’s energy and passion. And I, too, even if not yesterday, have fed the monkeys. (I can hear Ted Rush saying in his satisfyingly final way: ‘But David you must understand. We’ve all fed the monkeys.’)

One thought on “ROMANIA#2: THE SAXONS”