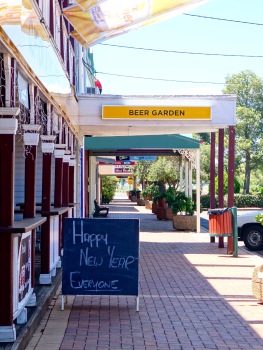 Main Street, Clifton, with a message for you all.

The Darling Downs are a plateau in southern Queensland, beginning 120 or so km west of Brisbane.

We arrived the most common way, through the Lockyer Valley one of the ten most fertile places in the world according to list makers with such things as an interest, and scene of extraordinary floods in 2011. The scarp at the end of the valley takes you up 650m quite promptly and the temperature falls 5 degrees which was one of the reasons why we were there. The road up the scarp was swarming with police. A big arrest had been made in the Valley: drugs, guns, money, etc. That was not one of the reasons why we were there.

It’s fertile on the Downs as well. Beef, pork and meat packing once, sheep a bit further out; these days more corn syrup and sunflower and safflower oil. But a lot of money was made and some of it at least was spent in Toowoomba. 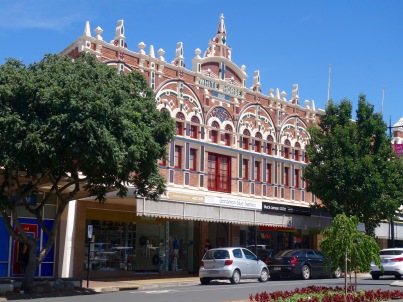 It has snowed in Toowoomba when I’ve been there in the past, a distinct oddity for Queensland, but precipitation could be a theme. Some say the name ‘Toowoomba’ is a corruption of the Aboriginal word ‘tchwampa’ meaning ‘water sit down’ an idea I like. The big town (110,000 souls, second biggest inland Australian city) sits on and around swamp drained by the East and West Creeks.

When the Lockyer Valley flooded so did Toowoomba, but the water didn’t rise with the sullen inexorability that flood water so often does.

It rose in a blaze of furious anger, a two metre wave from nowhere in ten minutes. The ground was completely sodden when the town got 70mm of rain in an hour, 150mm on that day. At least partly for the commentary, this is the clip of the event I like the best.

The two people who died were washed off the bridge to the left. It scarcely seemed possible when we were there.

The eastern edge of the scarp is also the absolute defining point of the Great Divide. None of this water contributed to the floods in the valley below. It will all have run off into the Condamine, a river with folkloric resonances, before finding its way to Lake Alexandrina not so far from Adelaide 2500km away.

The strip shops in the main drag are being cannibalized by two giant shopping malls at its western end and three or four others plopped where cars can get to them.

It can feel a bit like it looks above. But for all that it’s a university town and you can find areas with a bit of groove. A lane decoration for example.

It has Queens Park. In fact it has 150 public parks and gardens including the all star rose gardens which were well past their best when we were there.

And it has some of its built heritage. They seem to be more respectful of that, in some parts of Queensland at least, than in other parts of the country.

We left Toowoomba and drove south ambling over the Downs deviating via Nobby and Clifton to Warwick, and then east to the coast through Legume, Woodenbong and Beaudesert, a very fine drive. 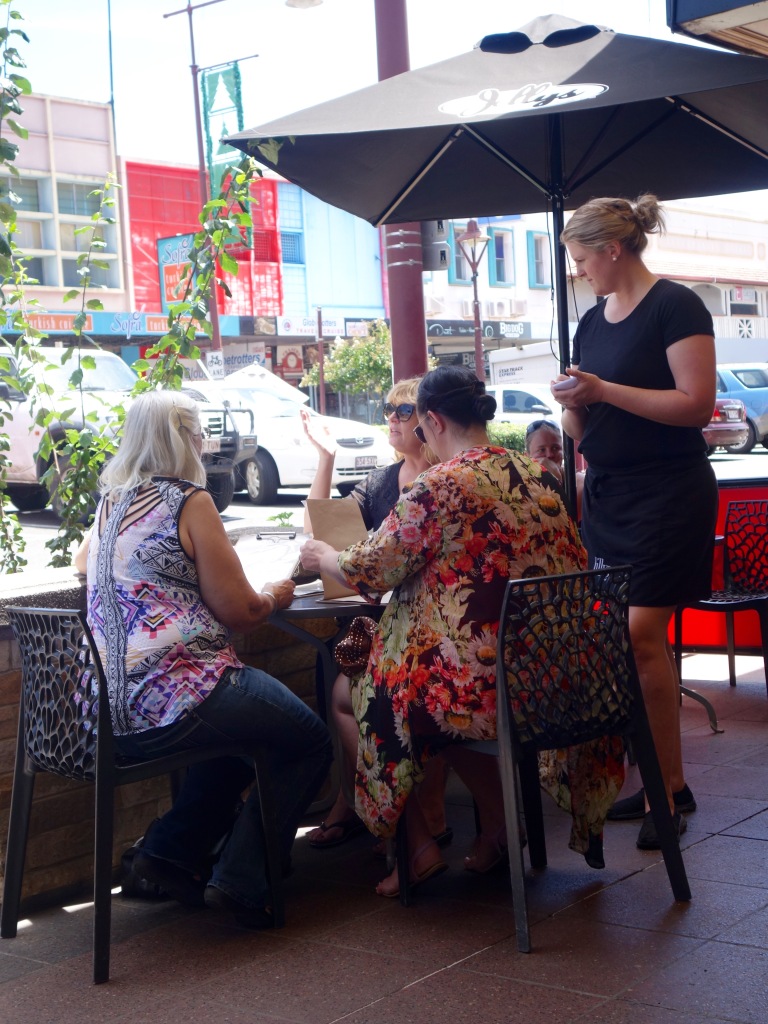 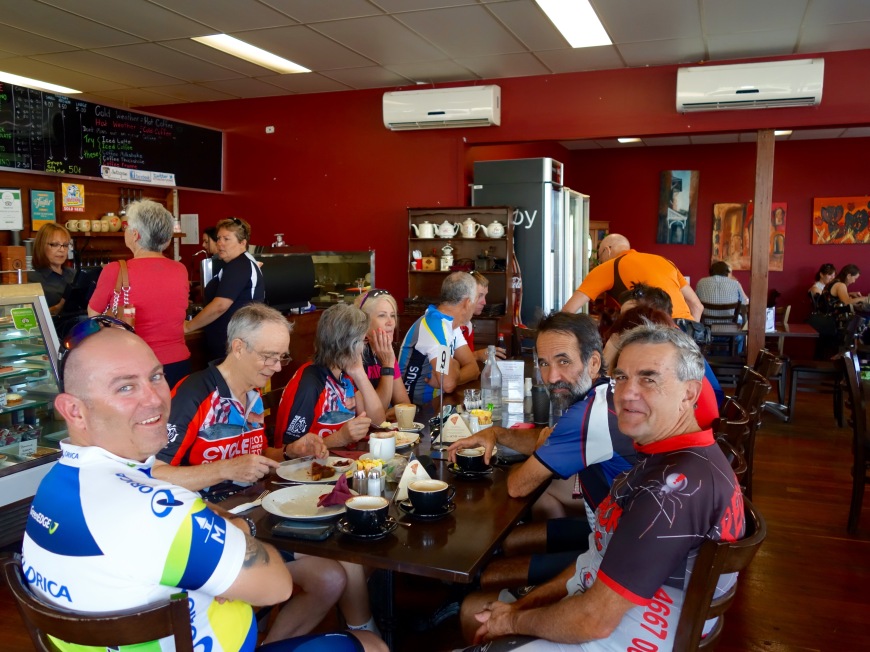 ‘Steele Rudd’ (Arthur Hoey Davis) wrote On Our Selection (the original Dad and Dave stories) while living in this area. He was born in Drayton, the original site of Toowoomba and now a suburb. I was pleased to discover that he ‘detested his struggling but admirable family being made into comic yokels, and had nothing to do with the radio program. Davis had a profound respect for the pioneering Australian woman, and he was particularly incensed by the use of ‘Mum’ when referring to Mrs Rudd.’ Hoorah.

This might be like Rudd’s Pub in Nobby. Mr Davis may or may not have sat at a table here writing.

And Jackie Howe who once shore 321 sheep in 7 hours, 40 minutes, using hand shears (October 1892, at Alice Downs Station near Blackall Qld) is commemorated in Warwick because it is near where he was born. It is important to scrape things like that into a pile which over time will take form.

And the purpose of our visit. This is how Australians celebrate 70th birthdays.

Back to Toowomba, one of the really remarkable things about it is schools.

As you enter Toowoomba from the road up the scarp there is no choice but to veer right or left around the two kilometre perimeter of Toowoomba Grammar and its vast grounds.

Should you choose to do so, you can stay at the Grammar View Motel and what you will see when you look, as of course you must, is this (below) … and a great deal more. The ‘more’ that I could see that day included a groundsman mowing patterns into the turf of Old Boys Oval in front of the agapanthus display.

Unlike the built cacophony of somewhere like the University of Melbourne for example, it is all of a style. And that style is palatial. And it is not alone in that regard. Concordia (Lutheran), Fairholme (continuing Presbyterian), The Glennie School (Anglican) and Downlands (Catholic) have equally sumptuous facades.

But they are just plums in a much bigger pie. Toowoomba has 32 schools educating primary students and 21 for secondary students. Certainly they collect students from all over the Downs, but this would still appear to be a surfeit.

This is the growth area: not the schools that charge you $30 grand to get in the gate, but the ones which charge $5 grand and then get topped up by the Commonwealth Government. And in some cases, too often, who ‘teach all their subjects from a Biblical worldview’ which may inter alia indicate that the earth is 6031 years old, that Adam (930) was outlived by Noah (950), and that the sentence ‘Now Terah lived seventy years, and begot Abram, Nahor, and Haran’ (Genesis 11:26) suggests that at the age of 70 Terah had triplets, and that that is worth arguing about. I saw all this on a giant wall poster, 20m long by 2m high, called ‘World History’ at a school in the Riverina not so long ago. It made me deeply uneasy.

Of the 21 secondary schools, six are government schools. I could work out the proportionate enrolment but suffice it to say Toowoomba provides more than a hint of the new world of fully privatised school education. It will of course never be fully privatised because, if you have a choice, you don’t want yobbos, tarts, oddballs, noisy kids, blacks*, druggies, and ones who don’t know what the right thing to do is. You don’t want unnecessary trouble. So there will always need to be a home for the residualised unless you want them on the streets, and the shopkeepers don’t fancy that.

[* ‘The College is all inclusive and inter-denominational. We also welcome students from indigenous backgrounds.’ So blackfellas as well as everyone. Splendid.]

I began my secondary schooling in Hamilton (Victoria) a town not unlike Toowoomba in some ways: a regional centre of a very wealthy grazing area. The bottom hasn’t quite fallen out of its economy but its population has been static for a long time — it could never quite crack 10,000 — and the principal of the school I visited there recently described the current social bifurcation: ‘The town is splitting in two: the ones who are going okay and the ones, more of them everyday, who are stuffed.’

It was always a bit like that. My father was never going to be invited to join The Squatters’ Club. But the school — a government school — I went to was excellent. Very strong in science, history and art, but good across the board. Solid, orderly, well administered, excellent morale, it had 890 students. Over the road was the Tech School, another government school, all boys, again very good at what it did. It had about 400 kids. Monivae, a Catholic secondary school then just for boys, which had been recently established, had around 200 (including Pat Dodson who I remember playing football against). Hamilton and Western District College (private, boys) and Alexandra College (private, girls) had about 400 between them and across primary and secondary years. Note that as happens today these kids were being collected from all over the place. Lots of bus travellers; and Pat was from Broome.

I had reason to visit one of these schools recently. Unsurprisingly things had changed. Monivae had girls and 608 students. The Colleges amalgamated years ago. The new institution has an enrolment of 477. A new Lutheran school has a P-12 enrolment of 199. (In what respect is that viable?) I can’t find the enrolment of the new Plymouth Brethren school, Glenvale. It could be 50-80 (and it could be a sister school of Glenvale school in Toowoomba which has as part of its mission statement: ‘With humble reliance upon the grace of our sovereign God, in order to assist Christian parents to fulfil their educational responsibility, and complementing the work of the Christian Church, to nurture our students in the fear and admonition of the Lord.’)

And my alma mater? Amalgamated first with the Tech School and then with a primary school, it now has a total enrolment across Years P-12 of 487 and a fragile reputation. That’s what two decades of neo-con thinking and sleight of hand distribution of federal funds has achieved.

Free? No not really. Secular? Increasingly less so. Compulsory? Absolutely. Trouble? In due course, nothing surer.

Warwick High looked like I want my schools, across the board, to look like. Confident, stable and proud.

As you’d expect the edge of the scarp provides much-coveted building sites. Kara View Court had just been opened up. Big blocks, big houses, several of them far more interesting than these.

But going back to the highway we drove past a gated community.