In the top three cities of the world, my top three anyway. (For differing reasons, Shanghai and Rome.) Vivid, maritime, exotic (ish), historic, a crucible, noisy but manageable — just the place to remind you you’ve arrived on the other side of the world. 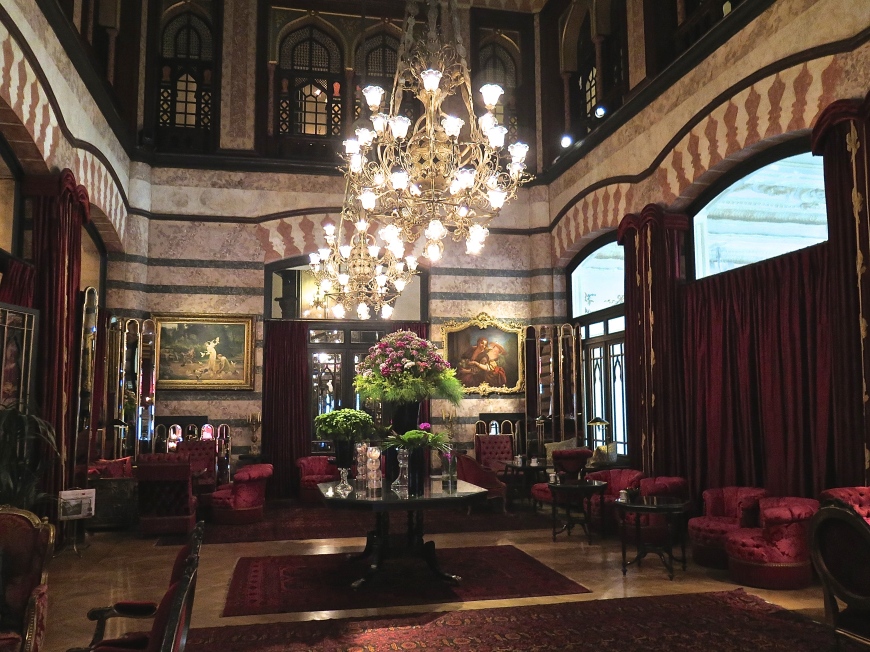 The anteroom of the foyer of our hotel, the Pera Palace. High tea was available here after 2.30pm. Agatha Christie wrote Murder on the Orient Express on our floor in a corner room across from Mike’s. (Amaze yourself.)

Myrna casting her shadow on Mesrutiyet Caddesi early in the morning. And below, on Istiklal Caddesi, Freedom Street, a main drag if Istanbul has one — about the same time. Besides it being Englishtime, the two figures make the photo worthwhile.

The church of Holy Wisdom, Hagia Sophia, a version of which has been on this same rather splendidly located site since 537AD. It became a secular monument in 1937 in one of the ambitious reforms of Ataturk’s government. This is a standard photo — the scaffolding adds a certain piquancy — but the building’s grandeur is undeniable. For some reason I liked it much better this time.

The Basilica Cistern. You don’t think much about places to store water. But if you didn’t have any you would. James Bond happens to have been here as well. (‘From Russia with Love’. The fish are still there, but let me tell you he wouldn’t have got far. What’s with the grey suits I wonder? They have serial longevity as a recurring motif.) 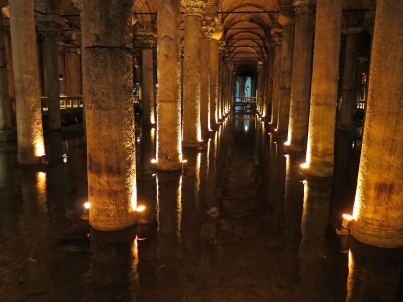 The twist here is provided by two upside down stone heads, one of which appears here. There are all sorts of stories about them, but as evidenced by a look at the other columns it is simply an arresting case of recycling. 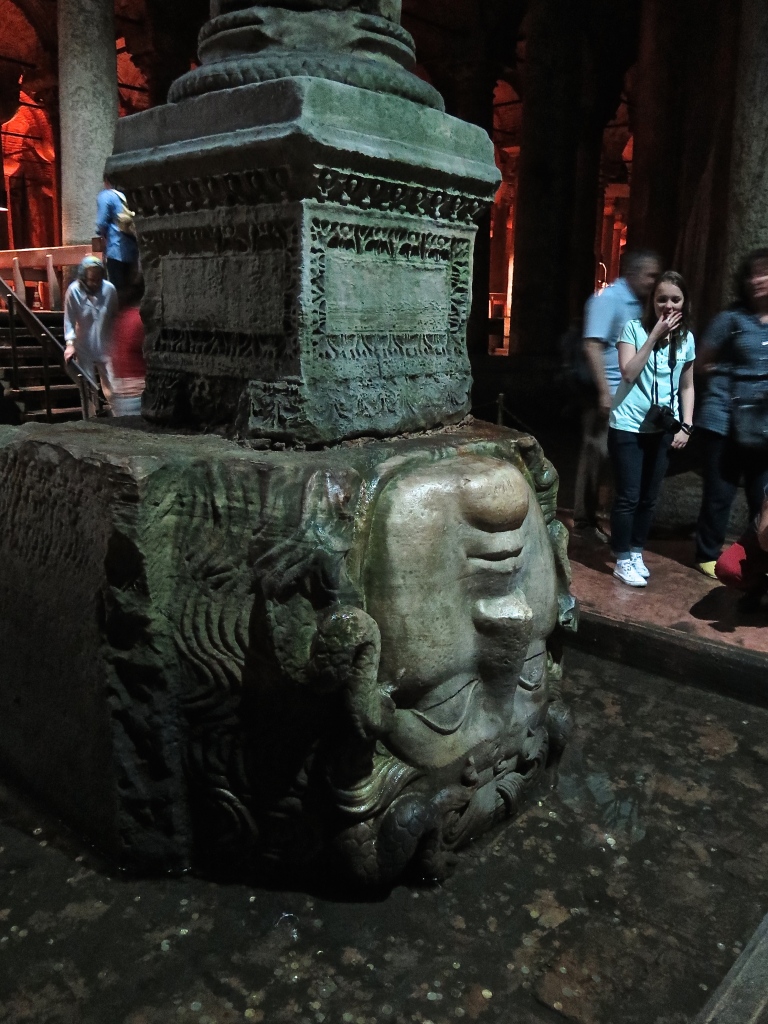 Tremendously exciting for the visitors

who nonetheless do not frequent the cafe, unappealling in this cool, and dank, environment.

A guard, stopping people surging forward in the Blue Mosque. She missed one chap — Indonesian I think — who spent a happy few minutes taking selfies with his iPad. I have a pic of him too but this one includes more of the glorious building. 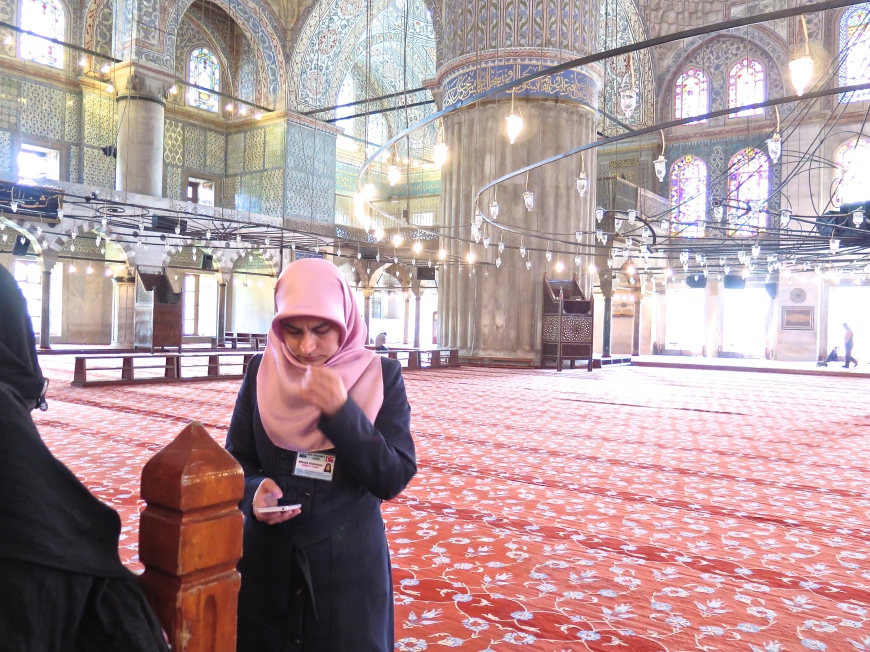 Some instruction at the gate to the Dolmabahce (‘fountain garden’) Palace, a preposterous confection not holding together too well after 160 years despite (because of?) having 14 tonnes of gilt spirited about its person. A travesty which made its own important contribution to the bankruptcy of the Ottoman Empire. 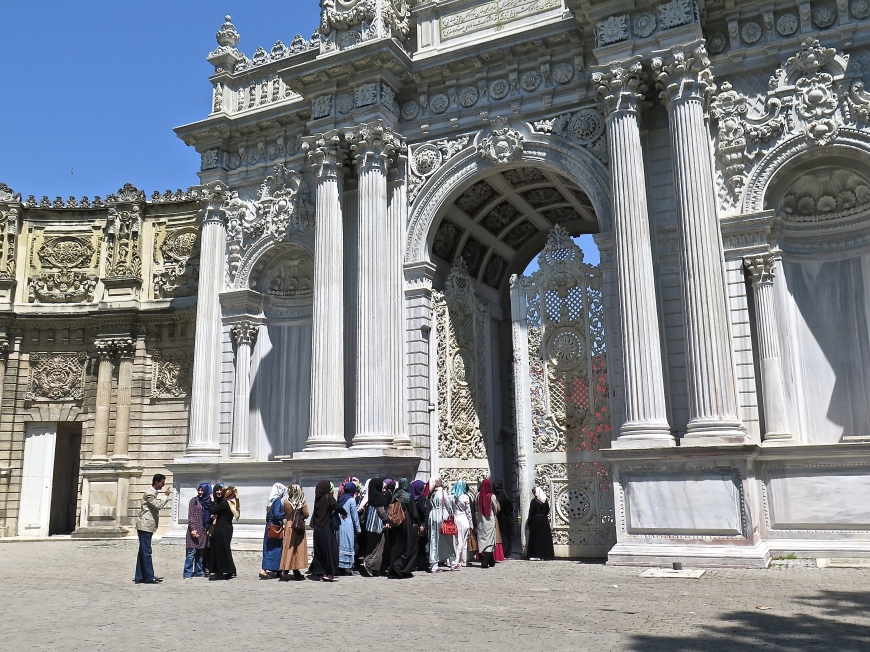 Man and tree in the Topkapi Palace gardens. Irresistible. Answer: no idea, although he spoke German. 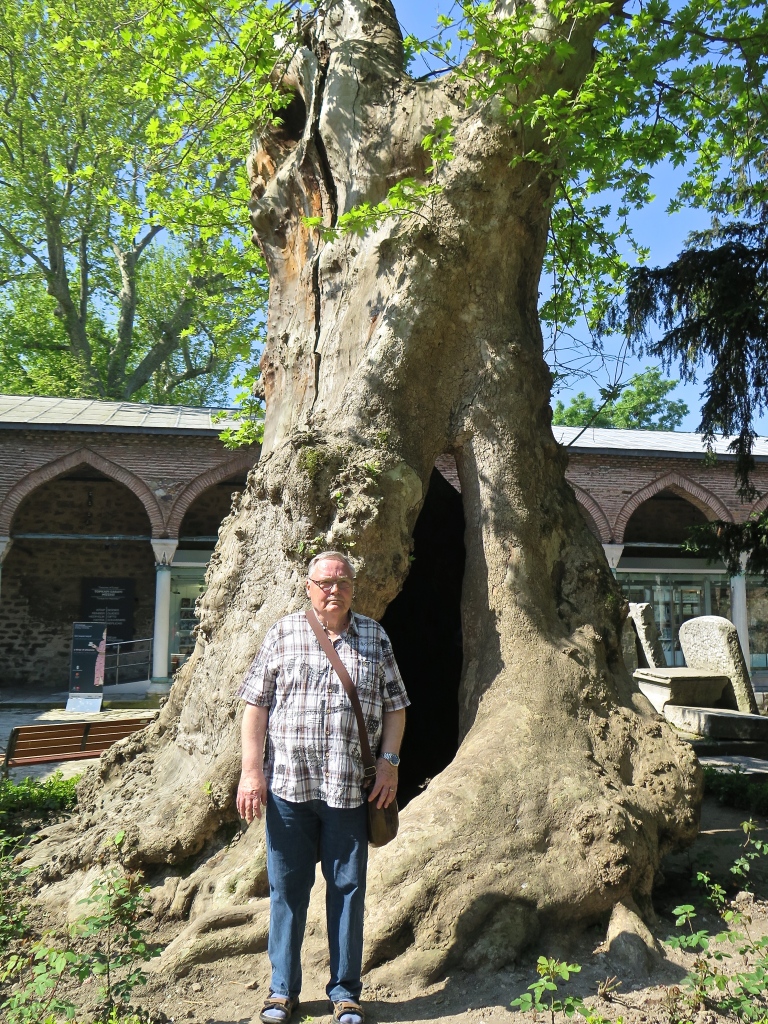 My companions. First night. Big town. Not sure what’s on the menu.

And one of the all time great guides, Onur Erturk. He’s about to become a father. Give him some business. Email: onur@rehberonur.com

Now to something more cerebral.

We went to the Gelibolu Peninsula just a few weeks after the centenary of its most famous moments. Follow us there. It’s not exactly as you think.

One thought on “Istanbul: Tourism”