The Japanese word for the colour under discussion is translated as ‘vermillion’. I’m not sure it is vermillion. I think it is orange, Pantone Orange 021 U to be precise, and thrilling in its own way. I was a bit stunned when I first saw it — used in a religious context to colour torii — and then I started seeing it all over the place.

To illustrate we should start with torii. A torii is a gate most commonly found at the entrance to a Shinto shrine where it marks the transition from the profane to the sacred. Japanese maps use torii symbols to denote the location of a shrine (which means they get a lot of work; plenty of Shinto shrines in Japan). They are not always orange. While we were walking we crossed the Torii Toge, the ‘gate pass’ where a shrine had been built in the 15th century by a warrior in gratitude for his victories. It is certainly still there but merges into the dappled green.

Tiny bit of pictorial proof. It’s not a great way to begin a story about orange, but it’s semi-famous and rarely seen because it is at the end of a fair climb.

Big ones seem to matter, so let’s begin with a big one: the entry to the Heian Shrine in Kyoto, built in 1895 to celebrate the 1100th anniversary of what Kyoto originally was (Heian Kyo) and itself mostly a fine shade of orange. You might just be able to make it out at the end of this run way. We hit a multicultural festival which offered kangaroo and emu snacks.

We are looking from the top floor of the modern art museum towards the municipal art museum where there was an exhibition of any number of styles of calligraphy provided in competition by the locals.

And I’m not really getting to the point but it was stinking hot and for lunch that day I was provided with iced noodles with cured ham, tomatoes and blood orange and it was most delicious. That’s going close to the colour theme.

But here’s the item in question.

Sticking with the theme of icons of Japan, this will figure in any collection of ten post cards of Japan.

It is the gate to the Itsukushima shrine on Miyajima (the ‘shrine island’ and popularly; the island’s real name is Itsukushima) south of Hiroshima, where deer sit in front of shops discouraging entry

and photographers of the torii can look like sand crabs.

This is a more modest shrine at Narai where everything was more modest. A dozen or so shrines set back into the mountain side there.

However if it’s toriis you’re after you go to the southern fringe of Kyoto to Inari, the Japanese word for that staple, rice, and the name of the God of the Harvest. You enter here —

But it’s not long before you are caught up in a procession of toriis, the ‘1000 Toriis’ so-named, erected by people looking for good fortune.

And from the other direction you can see that it doesn’t do to avoid naming rights.

Time to move from the sacred to the less so.

And finally a photo with no orange at all but with lovely complementary colours. This is memorable just to me really — a coffee shop in Sanjo-dori in Kyoto. Really really good coffee and more or less that moment we’d just fallen in love with this part of Kyoto.

For your next instalment, something remarkably different. 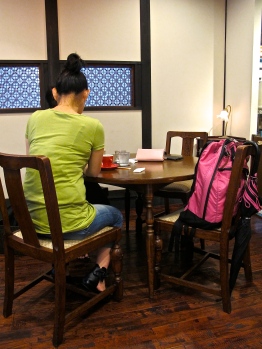