Everyone’s been to Japan. Ern Bond went to Japan.

Ern Bond was a pillar of the Hamilton Methodist church and a successful retailer of electrical goods. He was also my first employer. Once a month I used to climb on my bike and deliver his bills for exactly half the price of postage. This produced a complex relationship, especially regarding the five or six left at the end for which I couldn’t find a destination or which just seemed too far away. But that’s another story. Ern Bond didn’t just go to Japan. He and his wife went to Fiji and New Caledonia and New Zealand, and when he came back he held slide nights with loquacious commentary about his trips for the congregation.

Held in the back meeting room of the Sunday School building they were standing room only affairs, although I liked to sit in the front row — gripped. This would have been about 1960 and Ern Bond’s adventurousness, along with his capacity to fund it, was unusual. Simpler times. But he went to Japan. Alf and Alma of Alphington, our neighbours for 23 years, also went to Japan, an extraordinary departure from thoroughly locally-lived lives. So many people we know have been to Japan.

Australians have been going to Japan for some time, and Japanese have been coming to Australia — notably to Queensland. In fact their traffic was a major contribution to building the international airport at Cairns. Buying a beer at Nojiri after a hard day’s walk, the shop owner ducked out the back and played ‘Waltzing Matilda’ on the shop’s sound system for me. She said she’d been to Australia seven times, four to Cairns. This is an interesting relationship. Back in the days of Ern Bond’s slideshows, one of the few sermons of my father’s I remember took Russell Braddon’s End of a Hate as its focus. Russell Braddon was a prolific writer who spent some time in Changi prisoner of war camp, which usually has ‘notorious’ inserted adjectivally. He returned to Japan in the mid ’50s and came away with his mind changed. Other minds have been changed subsequently.

Japanese money developed the Gold Coast and provided Johannes Bjelke-Peterson with a good deal of his working capital. Japanese is by far the most popular Asian language learnt in Australian schools. But we went perhaps mostly because of Myrna’s expectations to find beauty. And we did find beauty, a great deal of beauty. And an endlessly intriguing country. So easy, so organised, so friendly, so polite and helpful to gaijin, such good food. And so complicated; not necessarily a good place to test the boundaries of individuality. In some important ways the antithesis of Australia.

It was verdant when we arrived at Narita, and it was verdant wherever else we went. The greens were so intense and ubiquitous the auto controls on my camera had trouble coping with them. The orange (Pantone Orange no. 1 I’d say) on the other hand it loved. You’ll see both below. It was also urban. An hour on the Narita Express, not a shinkansen but not a slow train, of which perhaps five minutes was outside a built up area.

A lot of  inhabited Japan looks like this. Not high rise, but dense. Flat land on Honshu is at a premium and where it exists it is covered in building. 130 million people, a quarter of them over 65, have to live somewhere. Living dense like this must have some impact on the way you live. Privacy, thoughtfulness about others’ needs, compactness, absorption in detail might all be expected to thrive.

Our hotel, not far from the fishmarket, had beds and wifi in the lobby but had seen better days.

And it had a Japanese toilet, one of the famous ones, providing most of the comfort and functions of an expensive car without the mobility. Except a twin flush: Japan, so clean and green that when some rubbish appears in a photo it is a talking point, and no twin flush.

I wondered then if perhaps the astonishing technological drive of the late ’70s, ’80s and early ’90s may have run out of puff, whether along with the economy it had peaked and had got stuck in the later ’90s. Because, have a look at this: Economic development over the last 200 years. Select Japan and run your cursor along the bottom line. Check out 1946 to1985. (Be patient. This takes a while to load.) A miracle. Many of the galleries we visited were big buildings with few artefacts and not much evidence of an active purchasing regime. Not much public money for inessentials? Probably.

But so many things worked so well. You could get off at the wrong stop from your train, but you’d have to try hard: written crawl bar in two or three languages, announcements in Japanese, English and sometimes Chinese as well. You can watch Narita’s flight program from inside the train, and you can observe announcements about train delays and abject apologies for same. When Kevan (with an ‘a’) Gosper — still going round — described Tokyo as ‘a safe pair of hands’ for the Olympics he was right. I don’t know that you’d notice the addition of even an Olympics-sized crowd at Tokyo Station.

What does it do to the people? One mistake is to assume that ‘modern’ means ‘western’. There are details everywhere that might confuse you about this, but it’s not true. Scrape the surface and you realise you need to start thinking again. Of course it’s rather tenuous to make these sorts of generalisations after four weeks, and it is obvious to say that things got more complicated as time went on. But I thought of it as a grinding process with the very tart but wafer thin wheel of western cultural influence chewing into millennia of something else of another character entirely. For some westerners who love Japan and who have made it their home it is the product of this grinding — Harajuku cosplay, hentai, punk rock for example — that makes Japan such an exceptional country. This is a country where this can co-exist happily with this  and that’s probably a cause for some wonderment.

Asakusa being a slightly racey suburb of Tokyo, this one —

Tucked away on the other side of the street were more people eating. Pete was from Queensland, At this moment our two young Canadian Mexican buddies were having a snooze having just arrived, Kaori was the guide and Pete and I were just on our third helping of fried chicken. 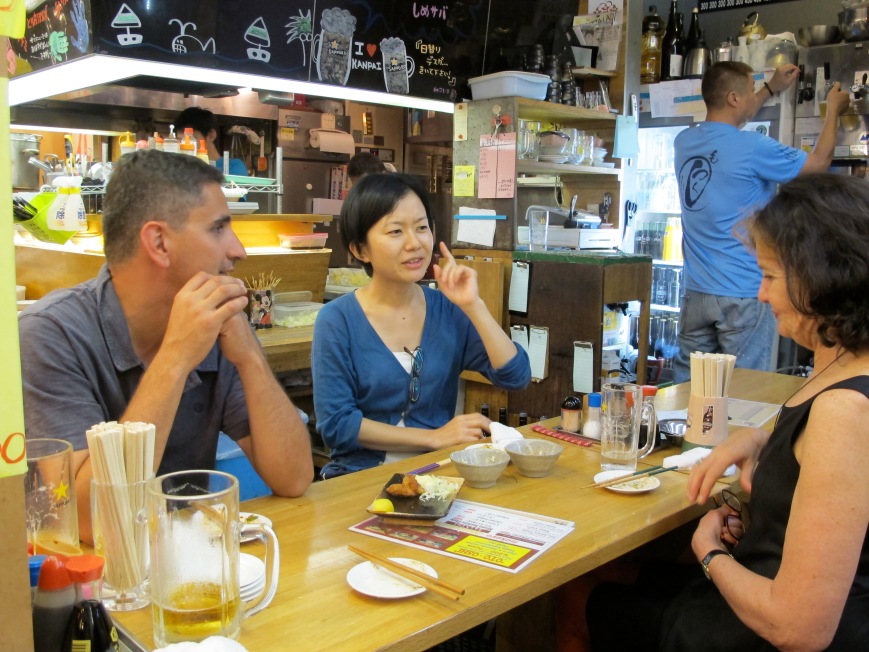 But there are still plenty of salarymen (and some women). On the day we arrived we tried our luck at a couple of places in a lane near our hotel. At dinnertime we just asked them just to feed us and they did, but I don’t know whether I’d give them a chef’s hat or a Michelin star. These would come later. But the beer was good and Myrna was the only woman who wasn’t serving in a packed house. The role of women in Japan is something of a mystery. Kimonos and geta, the elevated wooden sandals that women used to wear and that some (actually men included) still do would hobble you, about as much as six-inch cork heels and very tight skirts. The image of woman as doll is ubiquitous, and I don’t know what that means. I just note it in passing.

From the left: mask from Noh drama (since the 14th century; the mask is several hundred years old). A sample from a display of portraiture in Tokyo’s contemporary art gallery. A nail artist in La Foret, a shop of shops in Harajuku.

But this is the photo which sums Japan up for me, more than any other I took. Hung Yi, a Taiwanese, is the sculptor. Painted steel at Hakone Sculpture Park — one of scores of his works on display. Behind the salaryman there is more … And it could be just a little bit kerrrrazy … 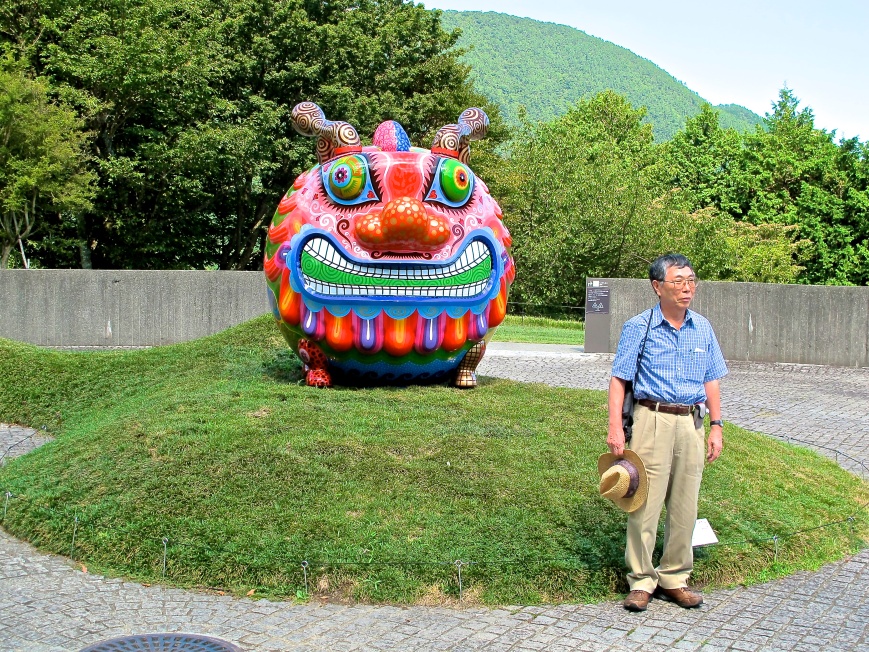