The Ginza had little glory (until Myrna found Fukuya department store anyway). The area round the hotel we stayed when we arrived was rather drab and bleakly urban. We moved to Ueno to join the tour. The view out our window. A field, field?, pond of lilies. 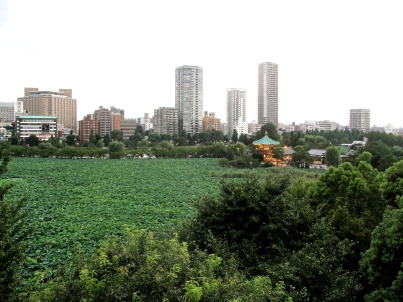 Then as planned we went to Harajuku.

One reason why Harajuku is a drawcard for tourists is Takeshita Street, seen here in the rain. 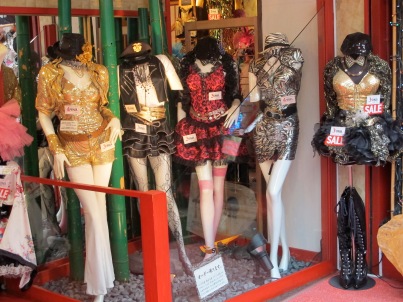 Among other things it offers little girls dress ups for females of all ages, and also a wide range of clothing for dogs.

We spent some time in the La Foret shopping complex dazzled by the offerings and the fact that we hadn’t lined up early enough to see an unidentified celebrity. But everyone else had. We wandered outside and heard a lot of noise coming from somewhere and thought we had better go and have a look.

We joined the crowd, and found a truly remarkable spectacle, a yosakoi parade. Yosakoi: we heard it before we saw it. Two guys on the back of a van with a massive mobile sound system; one singing, directing, exhorting, the other shooting video crawling along the main drag of Harajuku. Then the dancers come into view, not 25 or 30, but 80-100. I note there is  an upper limit of 150 in a squad and they are PERFORMING. So much action. The guys up the back are waving flags of about 20 square metres and the dancers, both genders all ages, are aflame but in time and motion, singing and dancing for half a kilometre or so. When they hit the finish line they are ushered off for a bottle of water.

So Japanese. Extraordinary costumes, but the defining aspect of yosakoi is that everyone must use naruko, small wooden clappers that were originally used in Kōchi Prefecture where the dance originated to scare birds away from rice fields. One group comes through. Then another. Then another. Then another. Then … (It’s urban Japan. There’s lots.) And then we crossed the railway line over into Yoyogi park where the yosakoi groups were performing on stages, and on another stretch of asphalt. Ah the joy of it all.

We walked back home through Shibuya. I suppose every story about Japan needs a shot of Five-ways … 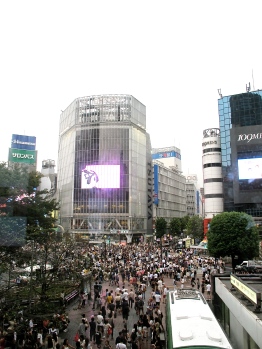 and probably a window display or two.

Two other photos for the fun of it. Two gorgeous boys I waylaid in Ryogoku and a sumo wrestler on his way to or from the sumo stables nearby. I would like to point out that rubbish appears in this photo. It won’t happen again. Ever. From the Emperor and his family down, we apologise.

And then we were off in the country. Which differed.