Well … like a lot of things. It’s actually quite a big country: 6852 islands, one of which, Honshu, is almost as big as Italy. From Wakkamai on the north coast of Hokkaido to Kanoya on the southern tip of Kyushu is more than 1800km as the crow flies. Socially, Japan is thoroughly regionalised. One reason for that is its mountains. The cone of Mt Fuji at 3776m is 600m higher than any other point. That’s distinctive and perhaps accounts for its deep cultural importance. There are 20 mountains between 3193 and 3000m. One of them, Okuhotaka, features below. But there’s plenty of others, long steep ridges of them which, for example, make it impossible to get from Matsumoto to Kanazawa via Kamikochi in anything other than a series of sharp doglegs. While only 12 percent of the land is farmed (very carefully), most of that land is irrigated. I would be stunned to find a wild river, or even a wild trickle, in the three southern islands. 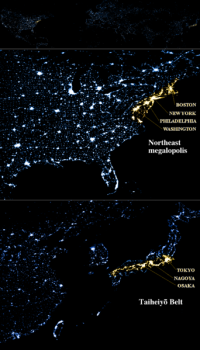 Most of the population lives in the Tokaido Corridor running from Tokyo to Fukuoka, a series of major plains on the Pacific Coast and bordering the Inland Sea. These night time satellite photos of the east coast of the US and Japan are to scale. The Kanto Plain surrounding Tokyo is the brightest light in Japan and that is probably because more than 40 million people live there.

So why not begin there, with a digression, because I love the photo. Yanaka, north-east Tokyo. You’d probably say ‘inner’ but I don’t know what that means here. Closer to the fish markets? Ginza? The Imperial Palace? The fleshpots? Don’t know what reference point is appropriate. Much of Yanaka, five or six square kilometres, was not destroyed by the bombing and fires of the second world war (or the various earthquakes, and fires to which Tokyo has been regularly subject). This is not a first class example of those buildings, but a renovated coffee shop surviving these periods and therefore prized. I like the sign (privileging English; this is a tourist route), the wood, and the sheen on the new tiles. But I particularly like the gentleman and the sharpness of the crease in his pants, as sharp and straight as his posture. He has an umbrella (two actually, matching), not a walking stick. I like the bus and the block of units behind it. Very Japan. And importantly it has the ubiquitous power lines.

Local fans of Yanaka would probably prefer this photo, with an emphasis on narrow windy lanes, bikes, flowerpots — and street art.

Below is a photo collage called ‘More’ by Nanami Sakata. But it looks like nothing so much as the view out the window of our Tokyo hotel window. 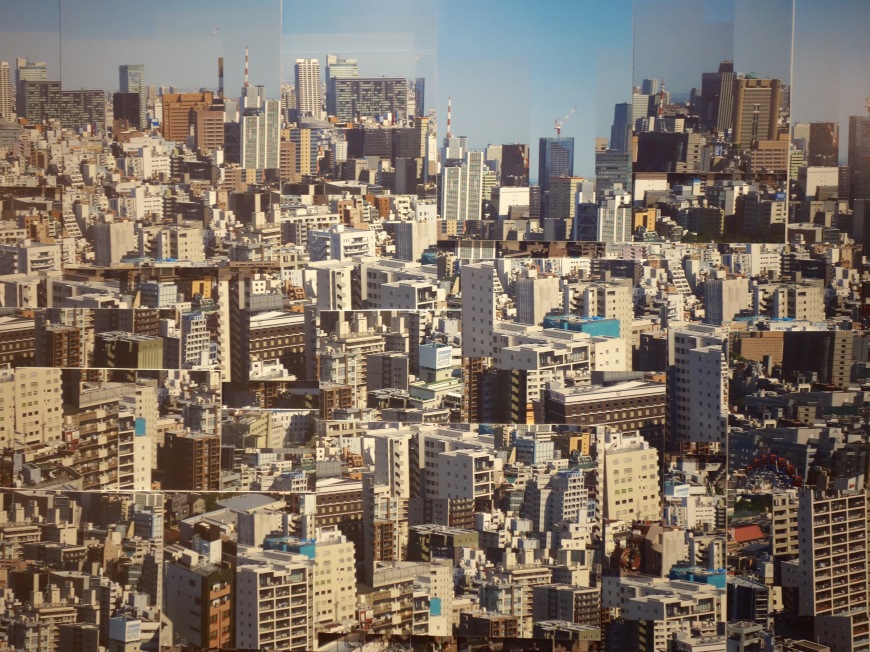 Continuing with art, this is the view out the window from the corridor outside our room: Asakusa Dori, the main route to the next suburb.

On, on, to the subject: the first thought — urban streetscapes have a lot of contiguity whether they are in the city (Osaka, off Mido-Suji)…

or a country town (Kotohira on Shikoku) … 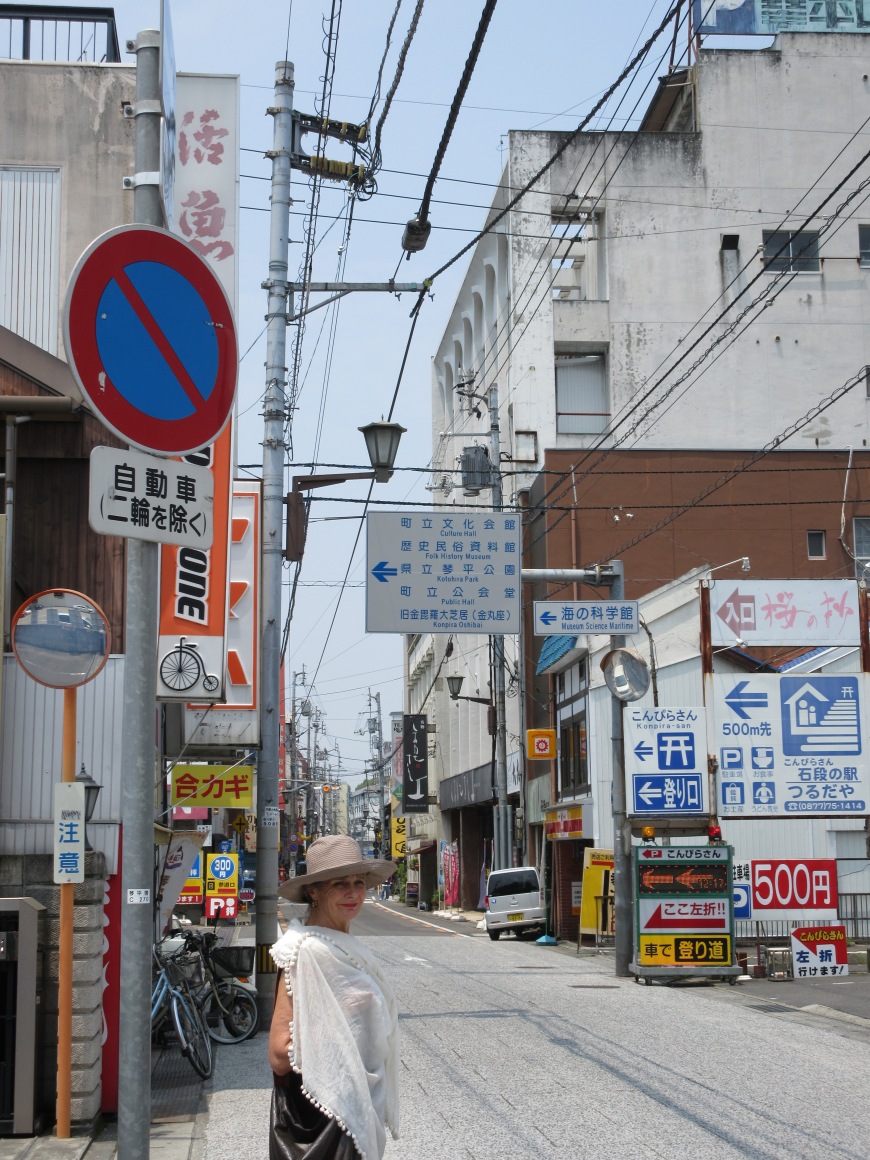 Kyoto renowned for its elegance and beauty has streets everywhere much like this off its grand boulevards. (Nishikikoji Dori, 30 metres off Karasuma.) But in this case Myrna is about to head into the Tiger Gyoza Hall, to enjoy one of the great feeds Japan has to offer and these are two of the geniuses responsible. 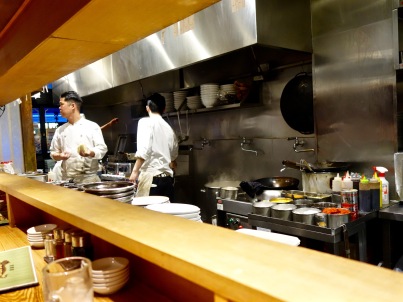 Second thought. The cultivated ‘countryside’ is not as we know it. It is packed tight. There is no broad acre farming in Japan. Farmland from above Kotohiro.

You don’t waste space. Even big houses, and this is a big house with probably a ‘large’ land holding, are islands in a sea of cultivation.

You’re as likely to find rice paddies in the middle of a country town as on the outskirts. In fact it might be very hard to define the outskirts. (Newly planted rice in a wind, eastern Shikoku.) Incidentally, note the banks of solar power panels. In the east of the island they were on every spare metre of land. More than 35 percent of the power supply on Shikoku comes from renewable sources.

Third thought. The urban suburban and rural development is confined to the plain, packed tight. At a certain contour level it just stops.

This is a generalisation. The mountain areas have their very small towns, but for such a densely populated country, not so many of them. Roppongi is not the only place there are hills in Tokyo. There is some outlying development in other urban areas, and as we will see there are temples on top of mountains. But from here — the top of Mt Daimonji, including Kyoto to the right, Inari and Nara over to the left, Osaka ahead and, pace the photo, it was a hot but clear day and we could see almost to the coast, perhaps 90km — nothing but houses all the way except where there was a hill or a ridge or an outcrop. In other countries such elevated locations would be much sought after. Film stars don’t live in the San Fernando Valley; they live in the Hollywood Hills. And it was from Okochi Sanso, a former film star’s house and garden that we viewed the same phenomenon from the other side of the Kyoto basin. He was up the hill, but no one else was.

As happens, after this I started seeing it everywhere. Certainly on Shikoku, but for all of our long shinkansen trip from Osaka to Tokyo, mostly on a plain full of houses, the roof ridges of which you could almost align with a spirit level. Any bumps were green and forested.

This might be one of those dumb tourist observations: a) obvious, and b) at the same time wrong. And even if I’m right there are probably perfectly obvious explanations. Stay on the plain if you want to avoid earthquake damage, and make sure some green areas are preserved in this welter of development are two. But then there are hundreds of tsunami stones along the coast line saying don’t build below this point, and I would have thought Japanese architects, engineers and builders would have salivated at the challenge of building on sharply sloping sites.

Next thought. The natural beauty of Japan’s preserved areas is glorious. 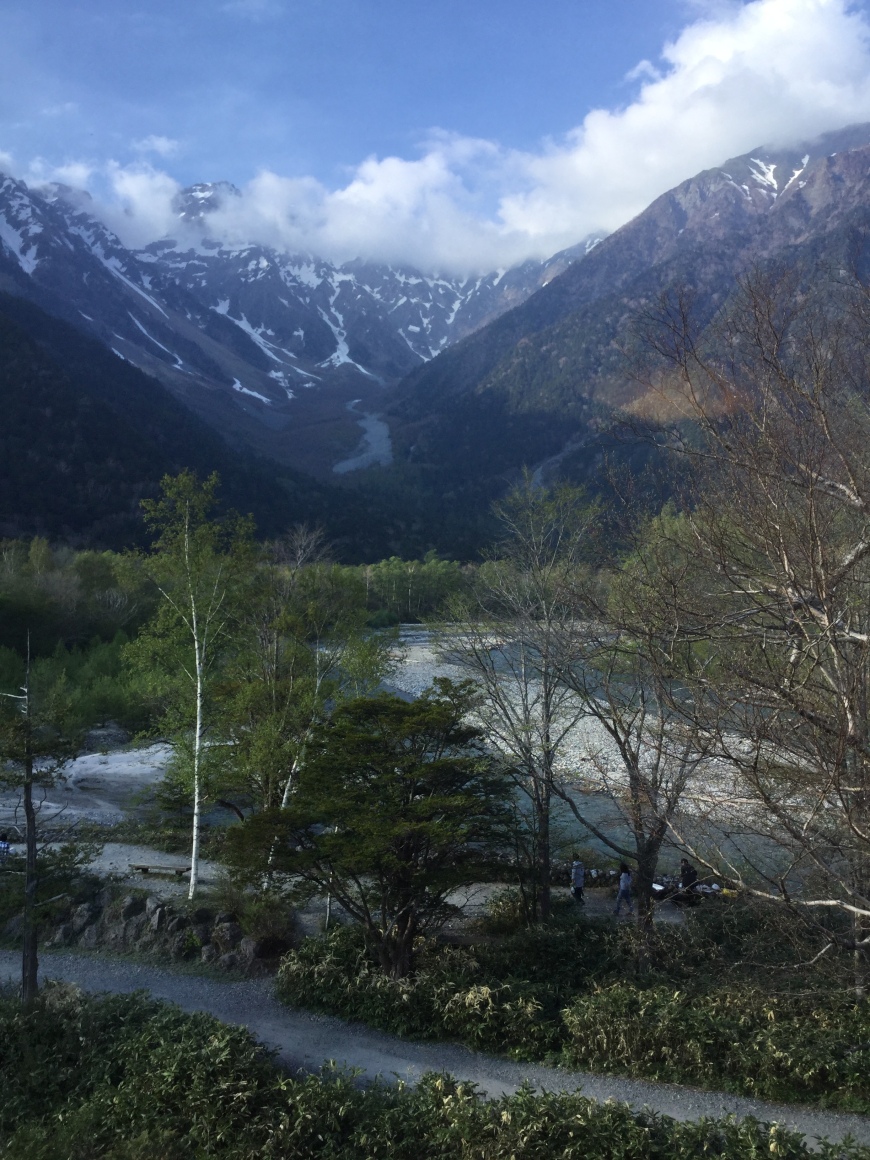 From our hotel window at Kamikochi late evening, Okuhotaka at the end of the Azusa valley in cloud. Below, the forest floor half way along that valley. Horizontal and vertical accents clearly articulated. None of the messy complexity of the Australian bush.

Last thought, what commentary does the Japanese garden, private and public, so highly theorised and deeply grounded in religion, history and culture, offer on these other observations?

The elements of the gardens are clearly derived from the riches of natural Japan with a focus on rocks, trees and water and not so much on the extraordinary floral abundance. Sand or gravel can substitute for water. Placement of the elements is critical down to suteishi (‘nameless’ or ‘discarded’ rocks) highly supervised to provide a sense of randomness. The last picture, a temple garden in Kyoto designed to some degree for its contribution to meditation, illustrates the drive to abstraction.

Not much room? Make it small. Bonsai is a Japanese art form. None of the gardens below is as small as most gardens we saw: tucked into boxes, run up walls, in pots, so carefully tended. It means I think that regardless of the intensity of urban living, and it is intense, a place must be found for connection with nature. That’s to be celebrated. 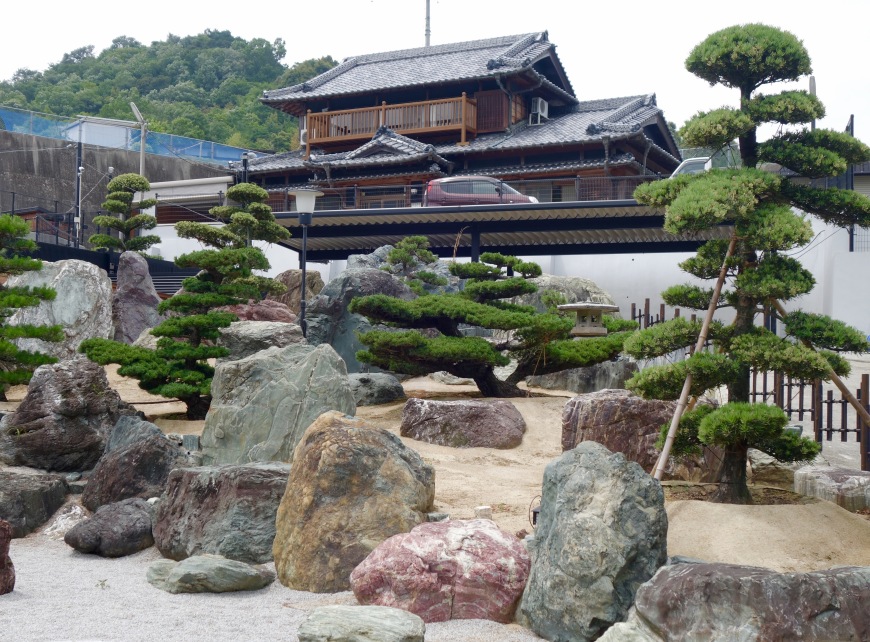 Above an uncustomarily big domestic garden near Ichinomiya with coloured rocks and okarikomi-trimmed vegetation, not just shaped but thinned at the same time to make fluid shapes and transparent views. We watched this happening. What an art form. Below not tent ropes but support for a very old pine tree creeping 15 or so metres horizontally out above this pond at the amazing gardens at Kanazawa.

Kenrokuen at Kanazawa again. A particular form of perfection realised.

Below, we didn’t go here. It’s the garden at the Adachi Museum of Art in Yasugi. It’s here because of its use of sand and ‘rugged’ features.

A Japanese garden. The final distillation.

One thought on “Landscape: Five Thoughts”