In Goring we thought we would try our hand at something different for our evening meal. So, generating the usual crisis, we wandered up the main street to explore the range of options. Indian we decided. Masoom was a very clean, very cautious, white linen napkin version of the genre and appreciated as such by the well-heeled scions of Goring. Whether or not any of the food would be recognised in Varanasi, Delhi or Mumbai is neither here nor there; it was tailored to palates very similar to our own and we left well-pleased.

A couple of doors up was this house.

There, I said. There it is. Writ large. The late evening sunlight bouncing off it. And I stood there trying to take just the right photo and failed because the owner came out quite briskly to see what we were up to. This provided the perfect opportunity for an investigation. Flint, she said. The house is a couple of years old and while there were some issues about its construction, you couldn’t fault the flint work.

So, flint. Bugger me. Harbinger of civilisation, essence of early tools, provider of the first blades and arrowheads, the spark for a million fires, the flint in flintlocks — and I’d never seen it before.

Flint is a hard, sedimentary cryptocrystalline form of the mineral quartz. It occurs chiefly as nodules and masses in sedimentary rocks, such as chalks and limestones. And what are The Cotswolds? A chalk escarpment.

You can see the glassy quality and the splendid variation of shade in the photo. These had been knapped, in this case split to provide a flat surface. Knapping is just the process of hammering a piece off the original ‘ball’ of flint. It is possible to make the pieces square or any shape in fact. Historically, flint knappers commonly suffered from silicosis, due to the inhalation of flint dust — the world’s first industrial disease. So much information. Truly blogging with a public purpose.

Flint does not occur naturally in Australia. Anywhere. Isn’t that interesting? Plenty of iron ore, loads of bauxite, uranium, mineral sands, rare earths, opals, even cognac diamonds, and yes, chert which is in the flint family — but no actual flint. That might mean something. Where we were however, there was plenty of flint. Sections of the Path were strewn with it. I picked up a piece that I’m looking at now. I like rubbing my finger on the napped section. On the other side it still has its vernix.

Flint at Oxford. The Father Walmsley Museum, an annexe of the church where I remarked on it first. The mortar is pointed unusually. 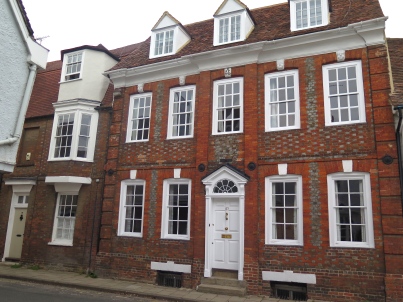 Flint at Abingdon, squared off by knapping.

Flint at Dorchester, still cobbled but fitted into rectangular slabs. 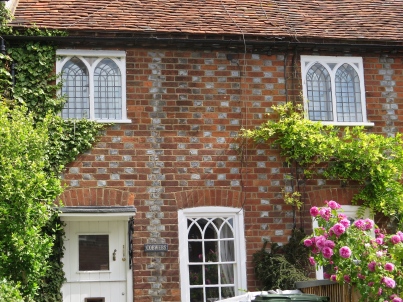 Flint at Whitchurch-on-Thames knapped to the size of half a brick.

Flint at Henley-on-Thames. Could it be called diapered? Actually no. It needs to be a diamond-shaped pattern for that. 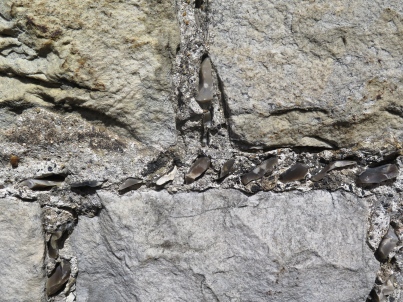 Flint at Windsor inserted into the mortar courses of the castle. To reduce the construction effort, or to make the mortar sparkle? Either way it’s galletting.

We began the day with a return to Ms Pierrepont’s establishment for proper coffee and the sandwiches we’d been promised. It was sunny day of sculptural stillness, the surface of the river a mirror.

Classic meadow walking with the river still about 25-30m wide. Cows, geese, black-faced gulls, kites and another one of Brunel’s masterpieces about halfway to the wood and the climb, ‘down to a dry bottom and then a steep ascent’ clinging to the rugged chalk cliff faces like human flies. The wood and the climb did make a change and like the rest of the day, they were just lovely.

All of which does not stop people being in nature, but not of nature.

Another of Brunel’s masterpieces near Gatehampton Manor. 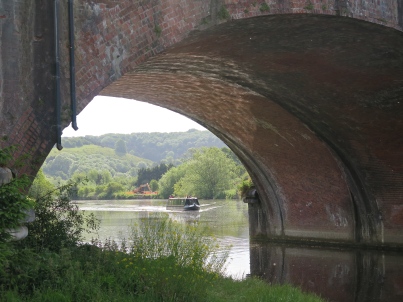 Below, a walker struggling up the ascent.

At left, two walkers finding themselves in a crazy mirror used presumably for practising dressage.

The climb preceded an attractive stretch through wooded farmland before a gentle glide down a busy road into Whitchurch, a very very pretty little town with a toll bridge authorised by the ‘Whitchurch Bridge Act paffed In this thirty-second year in the reign of His Moft Gracious Majesty King George III’. However the paffage of horfes engaged in drawing veffels along the river was legislatively exempted. And does the toll still apply? Yef indeed it does. Depending on the type of vehicle, anywhere between 40p and 3 quid. Pedestrians go free.

And on the other side of the bridge, the beginning of another cheery form of messing about in boats.

Mole and Ratty (from Kenneth Grahame’s Wind in the Willows) should be introduced here.

[Mole] thought his happiness was complete when, as he meandered aimlessly along, suddenly he stood by the edge of a full-fed river. Never in his life had he seen a river before—this sleek, sinuous, full-bodied animal, chasing and chuckling, gripping things with a gurgle and leaving them with a laugh, to fling itself on fresh playmates that shook themselves free, and were caught and held again. All was a-shake and a-shiver—glints and gleams and sparkles, rustle and swirl, chatter and bubble. The Mole was bewitched, entranced, fascinated. By the side of the river he trotted as one trots, when very small, by the side of a man who holds one spellbound by exciting stories; and when tired at last, he sat on the bank, while the river still chattered on to him, a babbling procession of the best stories in the world, sent from the heart of the earth to be told at last to the insatiable sea. …

[He meets the very capable Ratty.] ‘What?’ cried the Rat, open-mouthed: ‘Never been in a—you never—well I—what have you been doing, then?’

‘Is it so nice as all that?’ asked the Mole shyly, though he was quite prepared to believe it as he leant back in his seat and surveyed the cushions, the oars, the rowlocks, and all the fascinating fittings, and felt the boat sway lightly under him.

‘Nice? It’s the only thing,’ said the Water Rat solemnly as he leant forward for his stroke. ‘Believe me, my young friend, there is nothing—absolute nothing—half so much worth doing as simply messing about in boats. Simply messing,’ he went on dreamily. …

‘I beg your pardon,’ said the Mole, pulling himself together with an effort. ‘You must think me very rude; but all this is so new to me. So—this—is—a—River!’

‘The River,’ corrected the Rat.

And here, and on this day, that’s just how it was. I was most envious of the pair in the skiff above.

There is some conjecture about which of the grand houses on the long delectable curve of the other bank Grahame used as a model for Toad Hall, but I’m going with Hardwick House because of this squadron of ducks. I can also see the stoats and weasels living in the slightly wild wood beyond.

We sat on the bank at Pangbourne eating our lunch watching four child care workers with a passel of very small kids, some just toddling, and agreed that good quality childcare could be very good indeed. The focus was explicitly on the kids and what they were doing; they were talked with, encouraged in lots of language practice, and what they were doing was constantly named and converted into something interesting. An hour or so later we ran into a group of young mums in Purley. They were talking to each other, not watching the kids and in fact ignoring them as they wandered back and forth across a trafficky road and played in the cow pats on either side. Not bad mums, just a bit bored with their lot. It can be a virtue to get professional assistance. Go, you massively underpaid and undervalued childcare workers!

This chap was waiting his turn at Mapledurham Lock. There was a lot of opportunity to take dog on boat photos.

Question. In the event of a sinking would the vest have saved the pooch? That could only be investigated empirically. I have no answer. Sort of looked cute though, in a hi-vis kind of way. 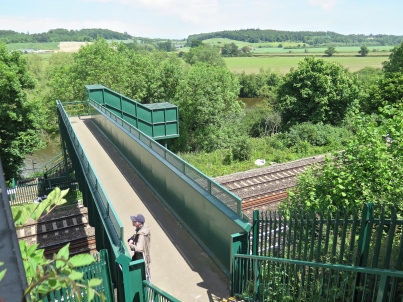 And this guy was, on his ladder, waiting for trains, which we had been following directly for a few kilometres and which — it must be said — were roaring past every five minutes. But it wasn’t just any train he was waiting for. He wasn’t even sure that the engine he wanted to photograph was coming past this afternoon. But if it did he would be there to see it. He gave me a very generous description of just what was going on. Perhaps when you’re walking you have time to see and note some of the world’s vast clutch of enthusiasms.

Rounding the big meadow that the Path brings you back to after the suburbs of Purley and the company of the train line there is little intimation of what lies beyond. Suddenly, with the advent of the Reading esplanade the river grows up. I had a sense that we’d left the countryside behind — not quite true as it happens — but we certainly had here. There was also a newly-minted sniff of grandeur about the view. 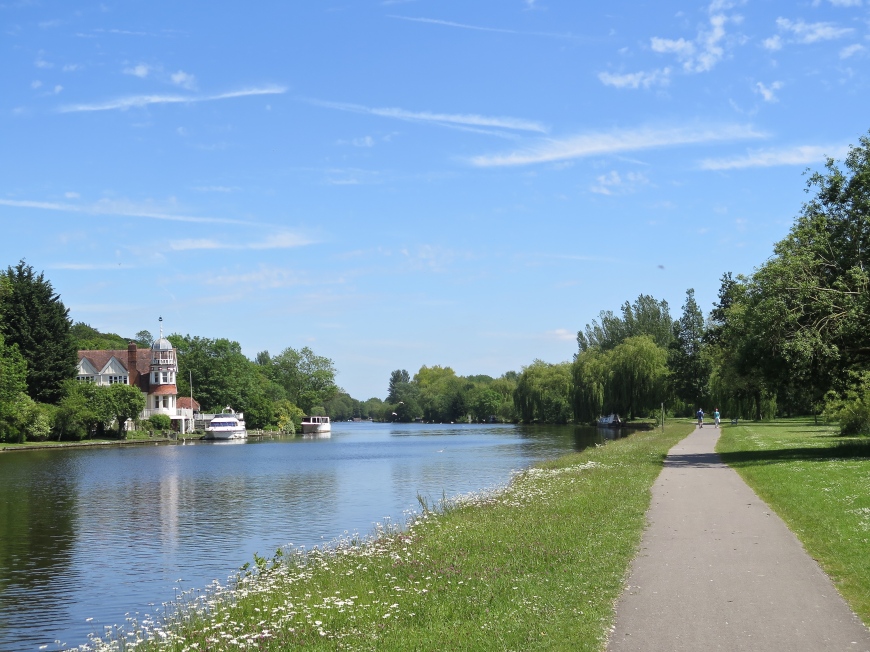 One thought on “#4 A Green and Pleasant Land: walking along the Thames”