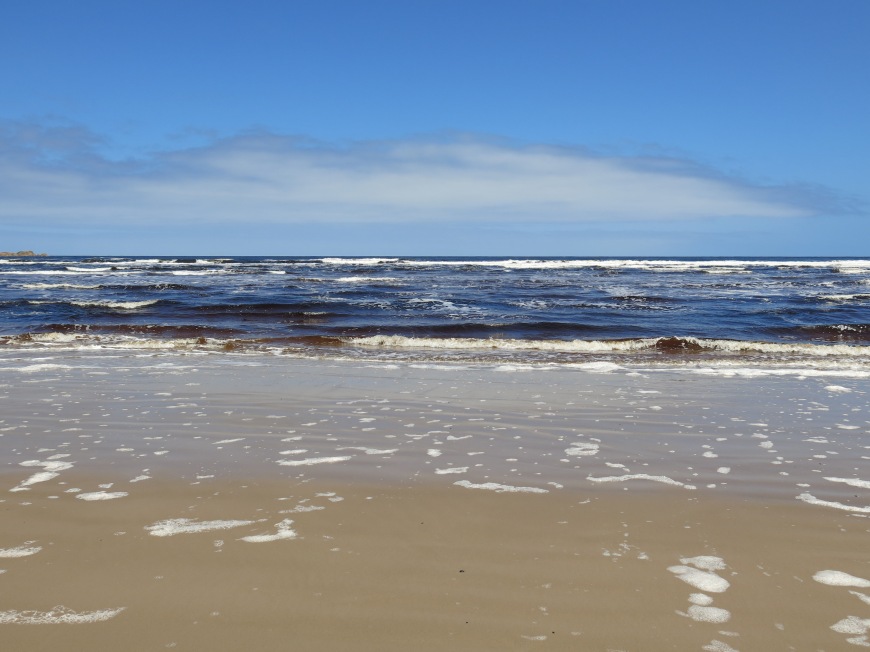 The locals are keen to tell you that if you head west from here you will go 8000 nautical miles, about 15,000 kilometres, before landfall on the shores of Argentina a bit south of Bahia Blanca (White Beach, ha ho) in the Golfo San Matias. And yes, you will travel well south of the Cape of Good Hope, a piddling 32 degrees south and even several hundred kilometres south of Cape Agulhas the actual southernmost point of Africa. And this is the Southern Ocean which on this day was unusually temperate. It frequently rejoices in a 20 metre swell which has been known to build much higher. South, it’s about 3,400 kilometres to Antarctica.

And the ocean water really is dark brown here, the product of tannin from vegetation coming down the Pieman River — we’re near its mouth. Immediately behind us is a button grass plateau consisting of very muddy peat. A little further back and we would be truly in west coast vegetation: up higher, scoparia which when you try to move it punches you back and much harder, and in most places ‘horizontal’  scrub which weaves a thick impenetrable web by falling over, shooting vertically from the stem, falling over, shooting vertically again, weft and warp, weft and warp, some of the densest forest in the world. 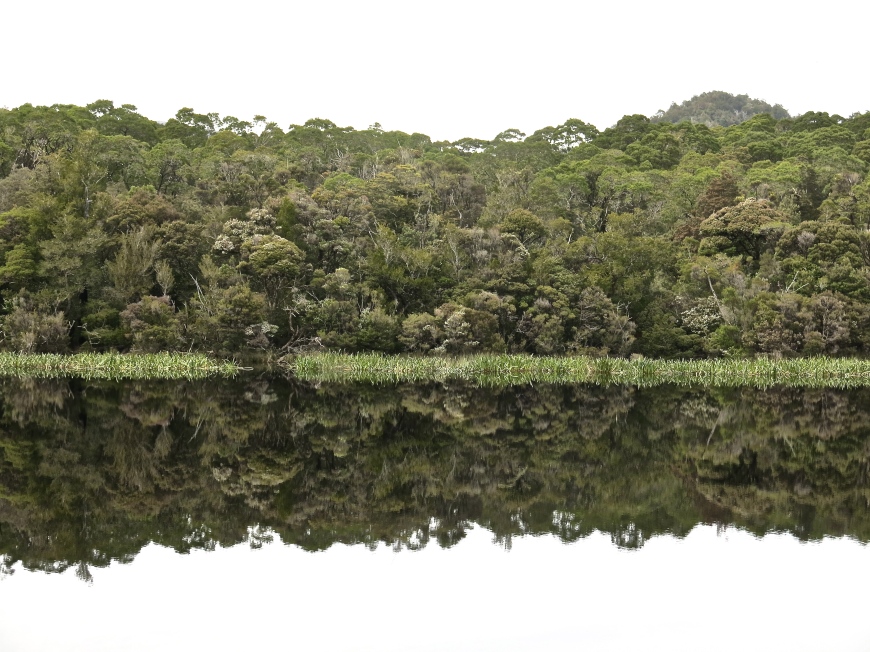 We are at one version of the end of the world. 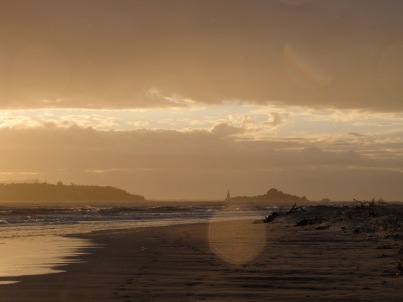 And even if you had been living in what is now called Tasmania 30,000 years earlier you wouldn’t choose this part of the island. It is suggested that in the early 1800s, the formative years of European settlement, there were nine language groups of palawa living there. Some may have worked their way down the west coast from time to time as far as Macquarie Harbour but there is little evidence that they lived inland from there. Even with possum blankets and capes it is a harsh environment.

The 3200mm average annual rainfall isohyet passes through Zeehan — that’s more than 10 feet of rain a year. One of my mother’s many stories about living in Zeehan was keeping shoes in the oven because otherwise the thread would rot and the upper would lift off the sole. I remember being in the vast paddock of boulders on Mt Field once when we saw a little muscle of storm cloud coming, quite isolated in the western sky. I was sure we could get to the K Col hut only a few hundred metres away for shelter but we failed comprehensively, and the horizontal sleet drove so hard that it hurt everywhere it hit.

‘Zeehan’ was the name of one of Abel Janszoon Tasman’s ships (the other was ‘Heemskerk’, names for the two mountains nearest to Zeehan) when he and his crew became the first Europeans to sight what he called Van Diemen’s Land (after the Governor of the Dutch East Indies) in 1642. After being blown out to sea from what is now known as Storm Bay, they eventually made landfall at Blackman’s Bay near Kingston. They didn’t try to come ashore until rounding South Cape leaving the west coast.

It is a place where one doesn’t necessarily live, but to which one clings. Just.

When my parents arrived in Zeehan in 1932, its population had been more than 10,000 but there were still no roads in or out, just train tracks. They arrived at their new home via three train rides. The Zeehan they found had a population of around 900. It had been a mining town, slowly gathering speed in stops and starts from the mid 1880s, but as elsewhere the Great Depression had broken the back of the mining industry. Gold had been hoped for initially but it was copper, silver and zinc that appeared in pay loads. The geological map of Tasmania consists of a patch of rainbows over this part of the world. There is an astonishing range of mineral deposits but not all in payable quantities.

At nearby Queenstown what it did produce was an ecological disaster which became a drawcard for tourists. Forests were cleared for mining props and to feed the mine’s 11 smelters which in turn produced acid rain and corrosive run off. This is turn killed off the remaining vegetation on the hills of Mt Lyell producing a moonscape. Some of this vegetation is now returning. Clinging. Just. 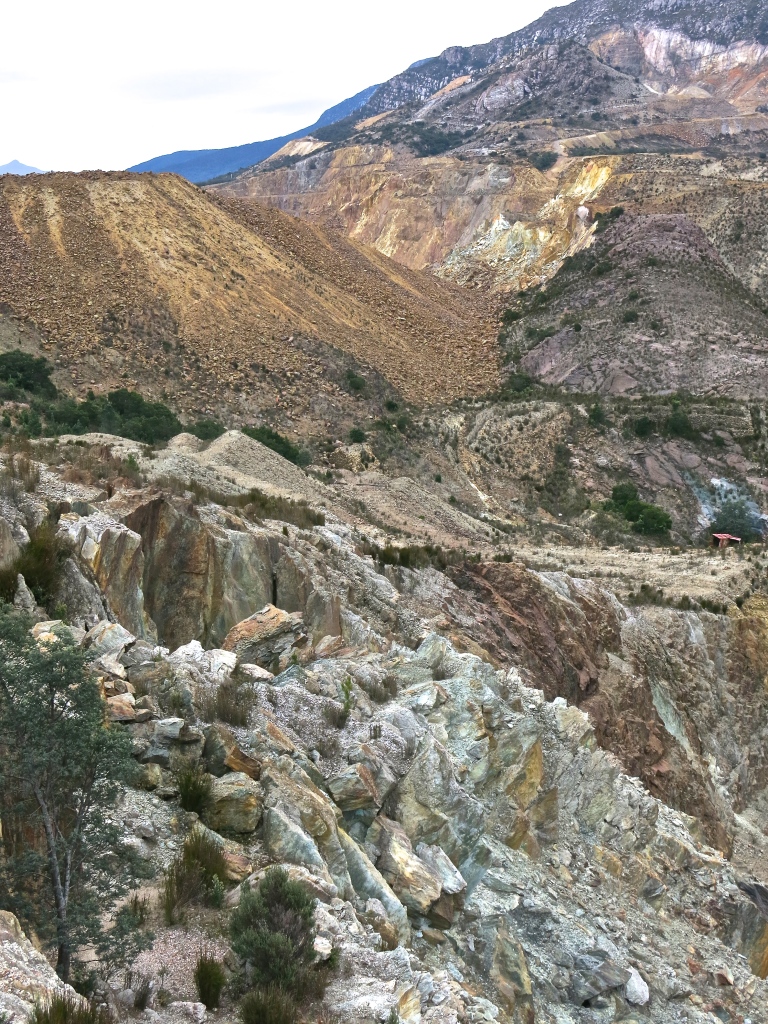 The Queen River which runs through the middle of town is still not quite pellucid. (Click on the photo to see just how much not pellucid.)

And yet, and yet, this is not why the tourists come to the west coast.

Wherever there are beech myrtle forests  — the wonderful nothofagus cunninghamii, you’ve seen them in ‘Lord of the Rings’, albeit in New Zealand — there is something absorbing and confounding.

I started by calling it beauty, but it’s more like profusion and also something more complicated and adult, older than beauty. The colours, especially and obviously the fluoro and neon greens of the mosses and cabbagey lichens, are too strong for simple beauty and anyway, with standard regard, you’re never quite sure what you’re looking at. Yes, it once was a tree but now its shape is outlined in moss creased by vines, and the dominant organism is actually a laurel using the beech’s ancient trunk as a host. It’s all wound together somehow. It’s the only forest anywhere that can still be traced directly to the forests of Gondwanaland, the ancient supercontinent from which all land masses south of the equator emerged.

This is not what goes on chocolate boxes, but you can’t help but stand back, absorbed. 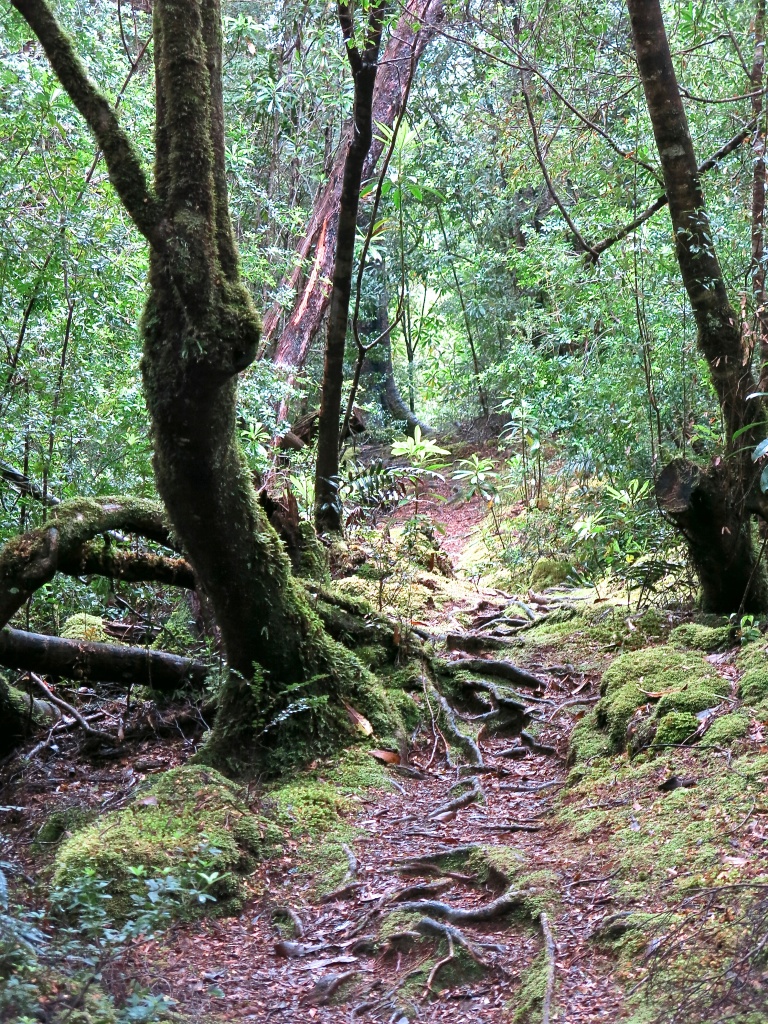 Endless complex communities of plants and other creatures. 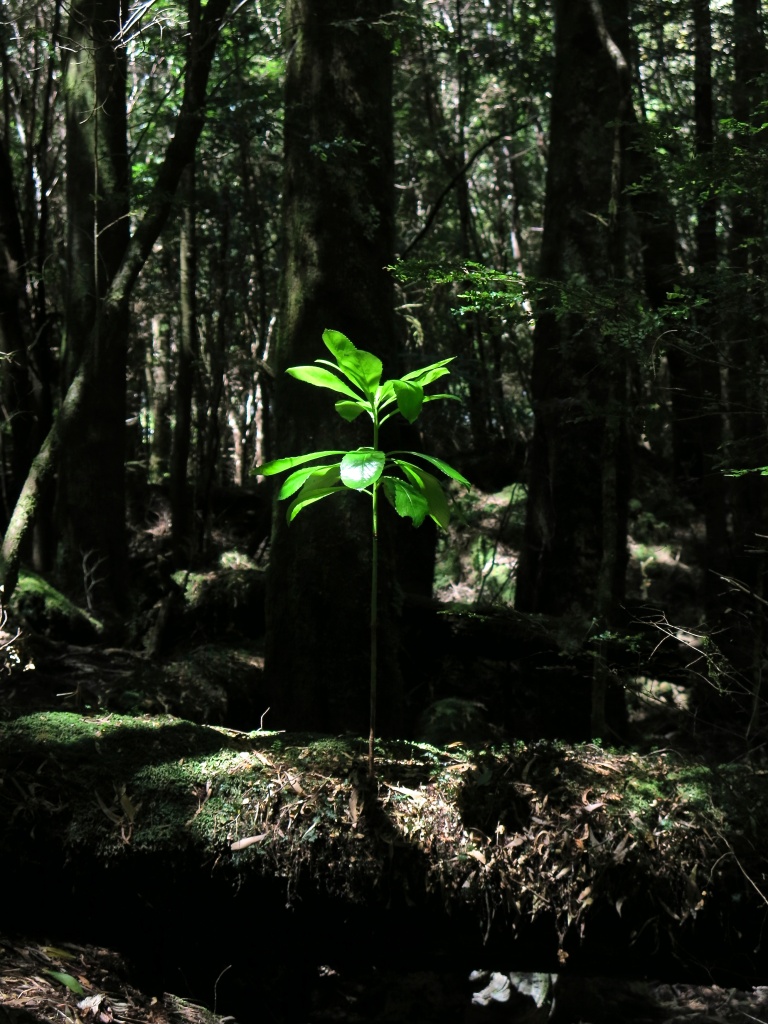 Right here is a very Tasmanian conundrum. World Heritage Areas cover about one-fifth of the island, 1.4 million hectares, with other substantial areas — if not the Tarkine where these pictures were taken — reserved from agriculture, forestry and mining. It is the original home of the Australian Greens and the only state government to have had Green Parliamentary Ministers. But we saw the utes with ‘Mine the Tarkine’, ‘Green is the new Red’ and ‘Save the planet. Plant a greenie’ stickers. The population is deeply split over conservation issues.

Many of the big ideas that matter can be found in raw form on Tasmania’s west coast. Like the forest, wound strangely together in the same experience. Loggers will tell you they are conservationists and that they love and care for the forest more than the greenies do. On the cruise up the Gordon, Captain Gary provided a fine representation of the developers’ outlook with an especial fondness for history and the prospect of a beer and a cray. ‘We live well over here on the coast. … Even though it was a couple of hundred bucks worth of fuel, the ladies used to get up to Burnie for the latest fashions. Paris, London. They love to shop, the ladies. A little red-haired fire-cracker who still drinks in the front bar at Hamer’s, she was the leader of the pack. Lord knows, you’ve gotta love ’em.’ I applauded every shovelful of authentic west coast soil he lifted from the hole he was digging for himself.

The explanation and commentary on the reasons for the area’s World Heritage status of the area was left to a  woman — highly articulate, well-informed and very cheery.

And then there’s the Hydro … 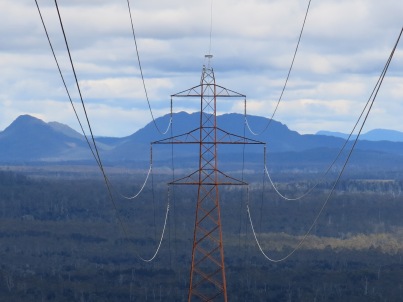 the richest organisation in and de facto government of Tasmania for 30, 40, 50 years. 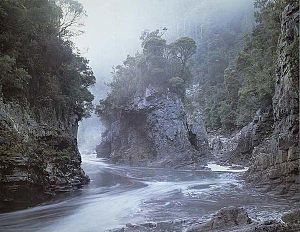 One of the reasons we were there this time was to accompany Keith, our most arboreal (actually living ‘with’ rather than ‘in’ trees) relative who, accompanied by a one-armed non-paddler, rafted down the Franklin River in 1983 arriving at the blockade two months before the election of the Hawke government which intervened to create the Wilderness World Heritage Area and, quite incidentally, saw the end to 50 years of the Hydro damming wild rivers in Tasmania’s south-west. A 30 year anniversary pilgrimage. (And no I didn’t take that photo. I haven’t got anything that iconic in my library.)

We first went to the west coast 20 years ago and one thing among very many that I remember was the vegetation meeting over the road a bit like this but more so.

There was considerably less tar on the road, no restraining posts, stretches of dirt only. The ‘Western Explorer’ otherwise known as the ‘Road to Nowhere’, in fact from Corinna to Marawah, wasn’t there. The Waratah and Corinna roads were dirt tracks. Strahan now has plenty of posh food. The cruise boats are 32 metre aluminium catamarans with giant but whispering diesel motors. Cradle Mountain is almost civilised. The busy tracks are duckboarded. The trail is more than thoroughly blazed.

However we had some tastes of the weather which is not subject to closeting. The Western Explorer and the West Coast Wilderness Train are both presently closed because of landslips. Frenchman’s Cap is still available only by backpack and tent. The roads still wind. And it’s still 15,000 k.s to Argentina.

Historian, miner, logger or green, there’s still so much to love. (And much more to come.) 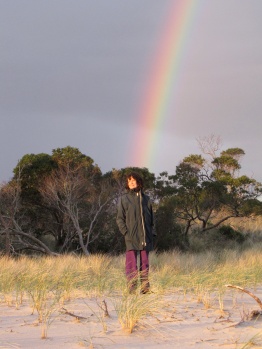