Something from 15 years ago, which might be self explanatory, about a man who moved me.

Presents are light, but friends are heavy.

They marched into the Golden Dragon, the four of them, looking as pleased as Punch — (blow out those cheeks and let the tones resonate!) Mr Zhang and Mr Huang and Mr Su and Mr Xu. (Purse your lips, curl your tongue and give a short whistle — Xu, Xu, Xu. You can practice for some time without getting it quite right.)

Mr Zhang had a car; that cut him out of the pack. No one else much had a car where we were going. But it wasn’t his, it belonged to the same mob who provided the mannequins, and he was a driver. I mistook his role for that of a sort of personal assistant/chauffeur to Mr Su, but I was a long way wide of the meaning of democracy in action. If you have an approved purpose you can organise a car, an interesting thing in itself, and for the two-day drive from Kunming to Mojiang you need a car.

Mr Zhang had no English, but he was a great communicator. I had better and easier conversations with him than with some of the Chinese teachers of English we met, providing the first of many encounters with the very high level non verbal communicative skills that were characteristic of our Chinese hosts. It is something about the language that makes you use everything you’ve got including, of course, tones, and gesture to get meaning clear.

Mr Huang was an English teacher and was immediately recognisable as a type. In schools I know, people would say of his ilk, ‘Mr Huang? Indispensable. First here, last to leave; always wanting to see if there is anything he can do to help.’ He would be the person who marked out the oval at 5am on the day of the athletic sports and collected the flags at its end. He almost quivered with alertness, wired in to everything that was happening, and later played basketball in exactly the same manner.

His English was like my best foreign language. You compose carefully and get held up by a bit of vocab that’s missing. Then you deliver your conversational offering in a manner suitable to the completion of a task which has taken you a great deal of effort: a flourish, head back into the shoulders, hand thrown forward: and how was that one! And then, if it was a question, hope that no one would answer or at least not at any length. So, as the group chatted away, my friend Mr Huang would suddenly pounce. ‘And how then do you like our gracious country!’

Mr Xu (Xu. Xu. Xu. I’m still practising.) was also an English teacher from Mojiang, in his early twenties and as bright as a button. His English was excellent and he was a key organiser, the king of the buses, who stayed with us for the fortnight we were in Yunnan, and was one of the factors that made the travel so easy. Immensely good-humoured, he had the world at his finger tips and nothing was too much trouble for him. He would explain with a courtesy and patience that I would like to be able to reproduce. 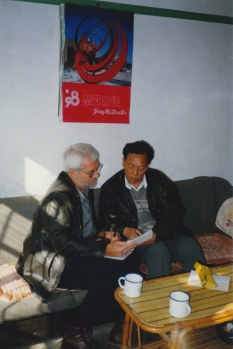 Mr Su was the reason why we were there at all. Now principal of Mojiang Regional Teachers College, he had been principal of Mojiang No. 1 Middle (secondary) School when one of his teachers had been awarded a scholarship to spend time in Australia. This teacher, Tao Ying She, now working internationally as an engineer, spent some time teaching at Hawker College in the ACT in 1990 where he became friends with Mark Hall, who with Mr Su’s help, organised the first visit by Australians to Mojiang.

‘What was my idea? It was difficult to decide. The government had not decided to make our town open. But the central government had a policy of open-ness, has said we should learn from Western countries. So I thought, yes, some should come. I have never met any foreigner at the time. I think, hmm …  yeop … very, very good thing. We could learn a lot from foreigners. I would hear the language spoken which I have taught for so many years. They too can learn from our school, our people and our country.’

It was, I think typically, a courageous decision. He had stepped over the cautious parochialism of his regional cadres and chosen to interpret the policy of central government in his own way, reaching out to an idea of a higher good.

‘When Mr Tao returned I let him have a report. We knew some things about Australia but very little. Mr Mark Hall visited and when he returned he wanted more to come back. He teaches Chinese and wanted to know Chinese more. He made a plan — The Bamboo Trail (travelling up the rivers to Mojiang from the south). I like to have PE teachers to learn some more about PE, and so a large group came for four days. They are very satisfied. We learned from each other so much, so much. From that time we have had groups of Australian teachers and students, maybe 136 persons.’

‘The best thing for us is that we can learn more English. Teachers and students can talk with native speakers, can make students study English harder and harder. After these activities, they feel it is not so difficult to learn to speak. They are excellent students. They work hard and they live simply.’

Mr Su decided to become a teacher very young. His father who died when he was eight had been a teacher, as are his two sisters. ‘I loved and respected my teachers.  In primary school I thought I would like to be a teacher. When I was young I like to learn very much. My family’s rules are strict, and they think it is good … ahm … discipline to learn languages.’

In 1962 he went to the University of Kunming’s Teachers College.

‘At this time the Cultural Revolution began. We had no lessons at all. We just stayed at the College and had some political study and discussions. At the beginning we were involved; later on some of us not so interested. But for the first time you could go anywhere, you could travel. Sometimes I went to Lancang (‘Lunshung’) or Jing Hong, but everywhere there were Red Guards.’

‘We waited for a job for two years. In October 1968 I was sent to Mojiang Middle School No. 1. At Mojiang the students did not come back. There were no lessons. They stayed in their farms and villages. Teachers had nothing to do for one year. The government organised teachers to do farm work. I could do that because I came from a village.’

‘Then school began again. Many children came back and we could teach. But at that time there were no exams. When students don’t have exams, they don’t work very hard. In our school I think the students were good. They were obedient. But it was a time when you had to be very careful.’

He was telling me this, drinking cup after cup of green tea from his personal thermos, sitting in the spartan principal’s office at Lancang decorated with a chest expander hanging from a peg on the wall.  Ten days earlier when we’d talked about the Cultural Revolution he had mentioned that 600 people had died in Mojiang, a town of about 20,000, and that teachers were disproportionately represented among that group. How did he feel about that? ‘Mao did many great things. He was a very great leader. But this  … very bad, very bad thing.’

These experiences had not diminished his interest in education and belief in its centrality.

‘To be a teacher you must learn a lot of knowledge, about every field. When I was in College I learnt Chinese, English Language and Chinese History and I played sport. To be teacher you must look widely. For me it is not so difficult to be a teacher … and I have children. Now my students are teachers, and I love that they are teachers. They do their job better than me!’

He had recently been studying Chinese history again to teach his own students and what he was learning was very much on his mind. ‘Chinese must know that China is a very old country with a long history. Many famous people tried to make Chinese stronger. They have failed. Too big. Too many people. No good government. Policy is a most important thing. A lot of Chinese people work harder and harder to make China strong, to progress. They must work harder for our country. Make our country richer. Every Chinese people.’

‘Chinese government found the problem in education. Most of the students study only to enter a higher level. When they grow and have to do some job, their abilities are not so good. Our educational rules must change.’

‘If teaching is orderly, regular, consistent, students can learn lot of things. Teaching methods have changed but not so much I think. If students want to go on they have to study hard. The teachers must prepare their lessons very carefully. But every year the children talk back a little bit more to their teachers. They have more free time, more things to choose and they lose what is good for them and their futures.’

‘In the future I don’t know what will happen. The level of life [standards of living] will improve. This is happening all the time. Such a big change in my life time. The important thing is to release students’ abilities, and teach them how to learn to learn. That is the education for the future. But spiritual life may suffer and education has two purposes both of which must be respected: the material life and the spiritual life. The spiritual life is what might suffer.’

When we arrived at the Nationalities School at Lancang (see p. 19) he gripped my arm and pointed at a slogan on a plinth with a huge golden key mounted on it. ‘This is what Deng says: “Education must confront modernisation. It must face the world, and it must face the future”. This is what I think too. This is why you are here.’ 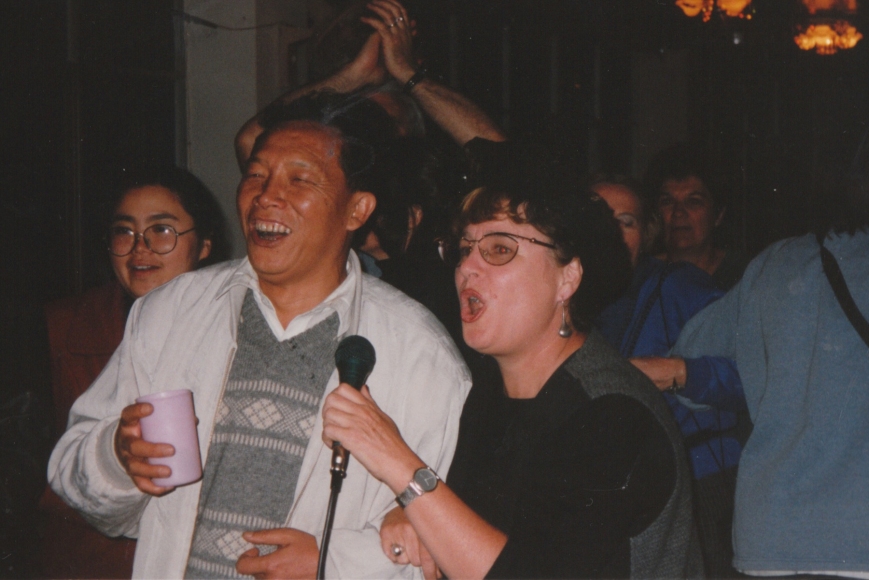 But the slogans of politics could never do justice to Mr Su and his beliefs as he lived them. They are too abstract and arguments about them and their meaning too arbitrary and ethereal. What he offered was his friendship and his vitality and warmth to a group of foreigners. He was at his finest singing ‘Country Roads’ to a karaoke screen, roaring laughing, offering toasts, chatting so openly with strangers, magically causing our luggage to appear after it had been left hours behind on a broken down bus, glowing with pleasure at the obvious success of our contact.

He left us at Jing Hong. We had drunk some whisky together the night before to say farewell because he was leaving for the long drive back to Mojiang very early in the morning. But when we woke up on the rock hard beds we thought we would like to say goodbye once more, and so I pulled a jacket on over my pyjamas and stuck my feet into my boots and we went down to the foyer. We waited for an hour and a half before he appeared beaming. ‘Ah good sleep. Good sleep.’ It was just the right thing to say. I was glad I got up.