Reservoir (‘Rezzavor’ or just ‘Rezza’, but never ‘Reservwa‘, puzzling to a Francophone) was built on the very edge of the city in the 1950s: a suburb of workingman’s houses. I say ‘man’s’, because women had been sent home from their war time jobs and generally speaking only a man could ‘own’ a house.

Rezza houses were built quick and cheap using indigenous materials and construction methods. No masonry, no deep footings, no slate roofs, no foot thick walls. As elsewhere in the nation Australian light timber framing was the go here. Stud walls made out of green eucalyptus hardwood on stumps dug into soil which moved, and moves, with the seasons.

Cheaper houses were clad with ‘fibro’ which, after the people who made it — that is actually made it, not the ones in the office — kept dying on us, turned out to have a very high content of crocidolite or blue asbestos.

It came in handy sheets, was great to paint, and was highly stable even if the rough use that might come from backyard cricket or kicking the footy would knock the corners off. But if you were cutting it, the asbestos would come loose and you could be breathing in mesotheliomic air.

Jessie’s house had both. Fake brick made largely of asbestos tacked onto deteriorating weatherboards which have a life, like light timber-framed buildings themselves, of about 40 years.

Men in space suits came to take the fake brick off which they did efficiently, quickly and I thought cheaply. And they carted it away. Where to? Back to Wittenoom where it had been dug from? Probably not. Wittenoom is now a declared contaminated site with entry forbidden. Don’t know. Somewhere.

At that time I patched up what was left and painted it carefully several times, but as would be evident 2019 minus about 1950 equals plus or minus 70 years, and the wall, a western-facing wall completely unsheltered from the weather, was cactus. The boards had split at the ends. The paint bubbled because the surfaces had been painted so often. Anywhere near a source of water was rotten with the ever present prospect of dry rot, a fungus that allows you to poke your finger through a piece of wood 50mm thick.

Walls like that make me anxious. I like buildings to be sound and sealed. There is no special reason why they must be, but that’s what I like. Every time I walked past, and this is my daughter’s house, thus regularly, I would see another blister or another crack or another join that was dismembering itself. And there comes a time, as these experiences progressively build on each other where something has to be done. It really just has to be done.

In addition it’s no use living in the best street in Rezza almost next to Crispe Park (pron. ‘Crisspark’) if your joint looks like a dump.

So I roused myself and sought assistance from my friend, staunch and true, Mr Findlay. I knew most things would be out of true and plumb (wasn’t too bad as it turned out) and that the wood framing would be either rotten or like tempered steel and shocking to work (the latter mostly as it also turned out), there’d be no insulation, all the stuff round the electricity supply was shot and a bit spooky  …

These pictures are here partly to celebrate the process (like Tubular Bells: (deep sonorous voice) ‘… the structural ply’) and the result, which was fine. But as well I like the visual aspect of the time series, the change in the weather, the ‘bung eye’ with the drop sheet over one window, how much rubbish is left in the front yard, whether Robbie’s car is home, and so on. And also to give three modest cheers for light timber framing, sufficiently uncomplicated that anybody can attend to it.

Here’s where we start. I have put my hand through a board to cart off to the paint man so he can identify and reproduce the hue. They are so smart these days. Just so smart. 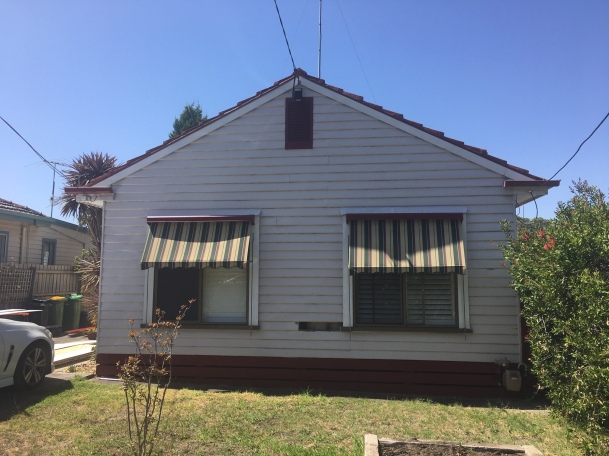 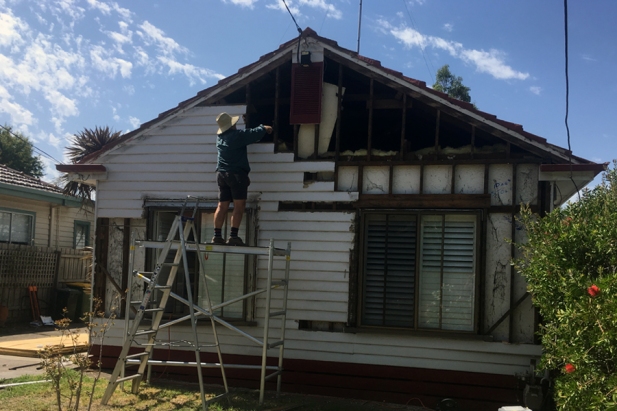 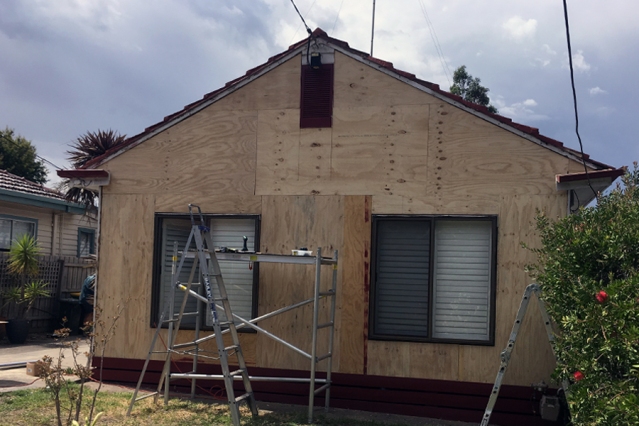 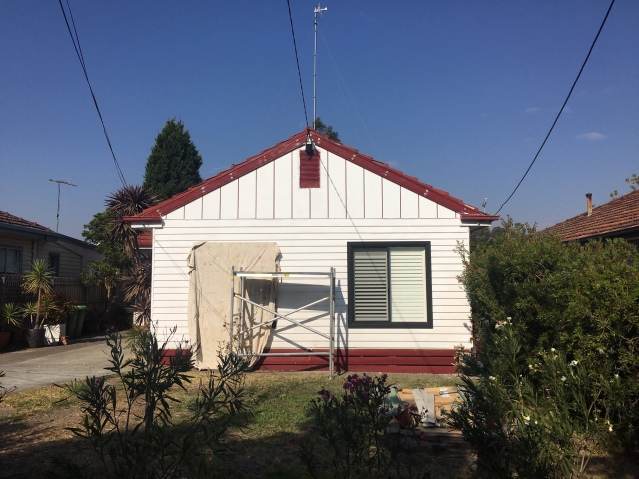 Not the best thing done ever, but hmmm yes, satisfying. That’s the word we’re searching for.